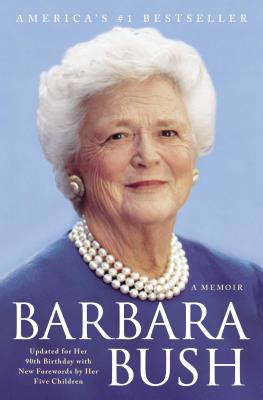 The classic #1 New York Times bestselling memoir, celebrating the life and legacy of First Lady Barbara Bush—now updated with new forewords from her five children, including reflections from George W. and Jeb, as featured on A&E’s Biography.

Barbara Bush endures as one of America’s most popular First Ladies. She has won worldwide acclaim for her wit, compassion, and candor as both a presidential wife and mother. In this fascinating memoir, Mrs. Bush offers a heartfelt portrait of her life in and out of the White House, from her small-town schoolgirl days in Rye, New York, to her fateful union with George H.W. Bush, to her role as First Lady of the United States. Here, she writes candidly about her early years with George Bush in West Texas and the tragic death of their young daughter, Pauline. She also discusses the world of Washington politics and the famous figures she’s met, as well as the disappointment of the 1992 presidential campaign—and the mixed blessing of regaining her private life, including her role as the nation’s leading literacy champion.

Filled with entertaining anecdotes, thirty-two pages of personal photographs, and a healthy dose of introspection, this memoir is “a book of good grace and humor—written in a style that, like the author herself, is straightforward, unembellished, generous, good-hearted, and wise…A pleasure” (The Washington Times).

Praise For Barbara Bush: A Memoir…

“A book of good grace and humor—written in a style that, like the author herself, is straightforward, unembellished, generous, goodhearted, and wise . . . A pleasure.”
— The Washington Times

Barbara Bush (1925—2018) was born in Rye, New York, and married George H.W. Bush in 1945. She served as First Lady of the United States from 1989 to 1993. She has five children, including President George W. Bush and Florida Governor Jeb Bush, seventeen grandchildren, and eight great-grandchildren. She founded the Barbara Bush Foundation for Family Literacy. She lived in Houston, Texas, and Kennebunkport, Maine.
Loading...
or support indie stores by buying on