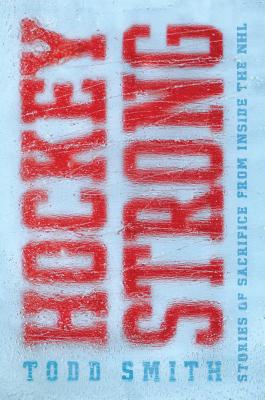 Stories of Sacrifice from Inside the NHL

For the casual enthusiast and hockey fanatic alike comes a collection of essays and photographs celebrating the grit and dedication of hockey players to withstand injury and hardship to play the sport they love.

Based on the author’s interviews with key figures and capturing the inside stories of superstars old and new, Hockey Strong is one of a kind: an exploration of the long, dangerous, and often arduous journey of an NHL player. Packed with intimate interviews, exclusive photographs, and iconic moments, it’s a beautifully designed celebration of one of the toughest sports in the world, and the hearts of the athletes who play it.

Featuring figures like Kris Draper, Shjon Podein, Craig Berube, Joey Kocur, Rick Tocchet, Chris Nilan, and even the trainer for the 1980 Winter Olympics USA team, Todd Smith provides unprecedented access to the stories behind famous hits, injuries, and fights, while also revealing the human drive and brotherhood that propels such players forward. With a particular focus on the Original Six franchises of the NHL, Smith interviews players young and old from across North America, and illustrates hockey’s broad appeal to new and lifelong fans.

Unique in its content and design, and appealing to all generations of fans, this is the perfect gift for both the passionate fanatic and the casual follower of hockey.

Todd Smith is a contributing writer for the Minnesota Wild of the NHL Network. His hockey stories have been published in Minnesota Hockey, USA Hockey, and Let’s Play Hockey. Smith studied very little at the University of Montana before becoming a Twin Cities publishing veteran and his work has appeared in The Rake Magazine, Minnesota Monthly, and Twin Cities METRO Magazine where he penned the wildly popular Spazz Dad print column and blog. Smith played high school hockey in the great state of Minnesota and his playing style was once described as, “surly and terrible.”


Praise For Hockey Strong: Stories of Sacrifice from Inside the NHL…

"This book isn’t just about physical pain. It explores mental pain as well.... The quotes are great and the feel isn’t overly gruesome, it’s just very real. Todd Smith (son of Gary “Smitty” Smith the head athletic trainer for the 1980 Miracle on Ice team) has created something special."
— Sportsology
or
Not Currently Available for Direct Purchase
Copyright © 2020 American Booksellers Association