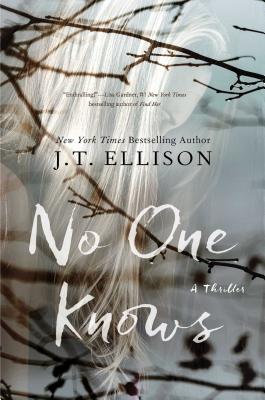 In an obsessive mystery as thrilling as The Girl on the Train and The Husband’s Secret, New York Times bestselling author J.T. Ellison will make you question every twist in her page-turning novel—and wonder which of her vividly drawn characters you should trust.

The day Aubrey Hamilton’s husband is declared dead by the state of Tennessee should bring closure so she can move on with her life. But Aubrey doesn’t want to move on; she wants Josh back. It’s been five years since he disappeared, since their blissfully happy marriage—they were happy, weren’t they?—screeched to a halt and Aubrey became the prime suspect in his disappearance. Five years of emptiness, solitude, loneliness, questions. Why didn’t Josh show up at his friend’s bachelor party? Was he murdered? Did he run away? And now, all this time later, who is the mysterious yet strangely familiar figure suddenly haunting her new life?

In No One Knows, the New York Times bestselling coauthor of the Nicholas Drummond series expertly peels back the layers of a complex woman who is hiding dark secrets beneath her unassuming exterior. This masterful thriller for fans of Gillian Flynn, Liane Moriarty, and Paula Hawkins will pull readers into a you’ll-never-guess merry-go-round of danger and deception. Round and round and round it goes, where it stops…no one knows.

Praise For No One Knows…

“Clever and compelling, JT Ellison’s NO ONE KNOWS is a page-turner full of unexpected turns and surprises. Pour a glass of wine, settle down in your favorite chair, and get ready for an entertaining roller coaster of a read. JT Ellison is a fast-rising star.”
— Jeff Abbott, New York Times bestselling author of THE FIRST ORDER

"J.T. Ellison's stand-alone thriller is a slow burn suspense that heats up, page-by-page, until the shocking end. NO ONE KNOWS is unputdownable, a gripping story that begs to be read in one sitting."
— Allison Brennan, New York Times bestselling author of NO GOOD DEED

“NO ONE KNOWS hooked me from page one. The more I read, the more I had to know what really happened to Aubrey’s husband that night in Nashville. And the more I trusted Aubrey’s version of events, the more I doubted them as well. Ellison has written a masterful game of cat-and-mouse.”
— Erica Spindler, New York Times bestselling author of THE FIRST WIFE and THE FINAL SEVEN

“No One Knows grabs you from the start and doesn’t let go. A compelling thriller about loss, betrayal, and buried secrets, it’s a book you’ll devour, trying to guess what’s going on and what will happen next. The twists are genuinely—and satisfyingly—shocking. J.T. Ellison has written another winner.”
— —Meg Gardiner, Edgar Award-winning author of Phantom Instinct

“J.T. Ellison has created one hell of a brain-bender. NO ONE KNOWS is a masterfully written shell game in which a grief-stricken woman is forced to reckon with her past until everything she believes about love, hope, and trust is tested. Ellison’s storytelling powers are on sharp display in this literary thriller, proving that no one is who they claim to be and everyone has secrets worth protecting. Compelling, perceptive, unsettling and with an ending so on point I wish I could read it again for the first time. I inhaled this novel.”
— -- Ariel Lawhon, author of FLIGHT OF DREAMS

"Like a nerve-shredding trip through a carnival house of mirrors, NO ONE KNOWS left me breathless. Ellison's deft, seamless prose makes her devilish twists look effortless, and her sleight-of-hand with the facts of Aubrey Hamilton’s troubled life keeps the tension wire-high.

NO ONE KNOWS is razor-sharp, shocking, and delicious."
— —Laura Benedict, author of Charlotte’s Story

"A thriller packed with nonstop action, real-life name-dropping and enough cutting-edge science to make you wonder how much of it could be true.”
— Kirkus Reviews on THE LOST KEY

"JT Ellison gets her Hitchcock on, expertly ratcheting up the tension, twisting her finely honed plot, and just plain messing with her characters' heads until the superbly explosive end. Not to be missed!"
— NYT bestselling author Lisa Gardner on WHERE ALL THE DEAD LIE

"The atmosphere of the book is taut, tense and suspenseful. The author's other forte is characterization..."
— The Tennesseean on ALL THE PRETTY GIRLS

New York Times bestselling author J.T. Ellison writes dark psychological thrillers and pens the Brit in the FBI series with #1 New York Times bestselling author Catherine Coulter. With millions of books in print, her work has won critical acclaim, prestigious awards, and has been published in twenty-seven countries. She is also the Emmy Award–winning cohost of the premier literary television show A Word on Words. Ellison lives in Nashville with her husband and twin kittens. Visit JTEllison.com for more information, and follow her on Twitter and Instagram @ThrillerChick or Facebook.com/JTEllison14.
or support indie stores by buying on