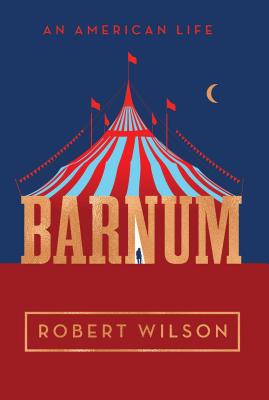 “Robert Wilson’s Barnum, the first full-dress biography in twenty years, eschews clichés for a more nuanced story…It is a life for our times, and the biography Barnum deserves.” —The Wall Street Journal

P.T. Barnum is the greatest showman the world has ever seen. As a creator of the Barnum & Baily Circus and a champion of wonder, joy, trickery, and “humbug,” he was the founding father of American entertainment—and as Robert Wilson argues, one of the most important figures in American history.

Nearly 125 years after his death, the name P.T. Barnum still inspires wonder. Robert Wilson’s vivid new biography captures the full genius, infamy, and allure of the ebullient showman, who, from birth to death, repeatedly reinvented himself. He learned as a young man how to wow crowds, and built a fortune that placed him among the first millionaires in the United States. He also suffered tragedy, bankruptcy, and fires that destroyed his life’s work, yet willed himself to recover and succeed again. As an entertainer, Barnum courted controversy throughout his life—yet he was also a man of strong convictions, guided in his work not by a desire to deceive, but an eagerness to thrill and bring joy to his audiences. He almost certainly never uttered the infamous line, “There’s a sucker born every minute,” instead taking pride in giving crowds their money’s worth and more.

Robert Wilson, editor of The American Scholar, tells a gripping story in Barnum, one that’s imbued with the same buoyant spirit as the man himself. In this “engaging, insightful, and richly researched new biography” (New York Journal of Books), Wilson adeptly makes the case for P.T. Barnum’s place among the icons of American history, as a figure who represented, and indeed created, a distinctly American sense of optimism, industriousness, humor, and relentless energy.

Praise For Barnum: An American Life…

“Robert Wilson’s Barnum, the first full-dress biography in 20 years, eschews clichés for a more nuanced story…Mr. Wilson’s book shows how one complicated, contradictory, morally ambiguous man struggled to improve himself while being single-mindedly determined to give delight to millions. It is a life for our times, and the biography Barnum deserves.”
—Wall Street Journal

“Exhaustive in scope and upbeat in tone…the book’s message is clear: Barnum was a self-made man in the American grain.”
—New York Times Book Review

“Better than anyone who’d come before, the Prince of Humbugs understood that the public was willing—even eager—to be conned, provided there was enough entertainment to be had in the process. That theory of Barnum’s genius makes Wilson’s book peculiarly relevant.”
—The New Yorker

“A real show stopper of a biography…Barnum is an excellent biography of a difficult subject — Wilson makes a convincing case that the legendary showman’s many faults should be considered in tandem with his accomplishments, which changed the course of American entertainment forever. [Barnum] was also a fascinating public figure, and Wilson’s book is the thoughtful biography that he’s long deserved.”
—Newsday

“Barnum was a complex public figure, a character begging for deep examination, and Wilson presents a true timeline of Barnum as a thinker, a believer, a businessman, and a family man. We see his opinions change, we see him learn from his mistakes, and we see him experience victory and defeat over and over…With Wilson at the wheel, a road trip through well-trod history becomes a truly remarkable ride.”
—Seattle Book Review

“[An] impressive biography of the infamous nineteenth-century showman…[Barnum] is here, in the pages of this thoughtful, deeply researched and revealing book. Barnum: An American Life often reads less like history and more like a cautionary tale for our times.”
—Chicago Review of Books

“An admirable, well-written, eminently readable biography of the great showman. Robert Wilson’s research is prodigious, his writing deliciously sly. This is an estimable work.”
—A.H. Saxon, author of P. T. Barnum: The Legend and the Man

“In this impressive biography, Robert Wilson gives readers the real Phineas Taylor Barnum, sweetening this already entertaining book with brilliantly presented facts that far surpass anything previously imagined about his colorful, controversial subject.”
—Jeff Guinn, author of Manson: The Life and Times of Charles Manson and The Vagabonds: The Story of Henry Ford and Thomas Edison's Ten-Year Road Trip

“Robert Wilson's Barnum is portrait in the round: Phineas T. Barnum as impresario, myth-maker, salesman, huckster, temperance advocate, politician, bankrupt, millionaire-- and purveyor of the exotic, the curious, and lucrative.  Scraping away the legend from the man with consummate skill, Wilson clearly delivers the best and worst of Barnum, which is the best and worst of America: self-invented, brash, infamous and joyously alive.”
—Brenda Wineapple, author of Ecstatic Nation: Confidence, Crisis, and Compromise, 1848-1877 and Hawthorne: A Life

“Robert Wilson's lean and forceful Barnum adds a fourth ring to the great circus of its subject's life: an appreciation of Barnum's self-awareness, public-spiritedness and efforts toward moral improvement amidst all the outrageous hustle and humbug of his spectacular career as a showman. Barnum is a witty, level-headed model of how to view an historical figure by continually rotating the lens of the present and the lens of the past. The book is a rare combination of shrewdness and warmth.”
—Thomas Mallon, author of Watergate and Landfall

“Anyone seeking to reconcile the moronic with the magnificent in American culture would do well to start with Robert Wilson’s Barnum. It is a fascinating, accomplished biography of a brilliant and shameless impresario who in the same lifetime sold tickets to viewings of a mermaid fashioned out of a monkey top and a fish bottom, and the historic spectacle “Nero, or the Destruction of Rome” with a 1,200-member cast, an orchestra, a choir, and a massive menagerie on a half-mile stage. This story has it all: entrepreneurial genius, boundless optimism, personal tragedy, professional ruin, and a suicidal white elephant. The shows are the greatest on earth and somehow everything is always quite literally on fire. Perhaps without intending to, Wilson has held up a nineteenth-century mirror to the relentless berserk of our own time.”
—Ken Whyte, author of Hoover: An Extraordinary Life in Extraordinary Times

“The show must go on! Robert Wilson's rip-roaring biography of the circus entrepreneur P.T. Barnum is the stuff of dreams—the American dream of optimism, hard work, success, failure, and finding the strength to turn it all around. A bravura work.”
—Dr. Amanda Foreman, author of Georgiana: Duchess of Devonshire and A World on Fire: Britain's Crucial Role in the American Civil War

“It turns out that one of our great editors is also a masterly writer, able to pull off the biographer's most impressive trick—making the reader care, deeply, about a figure she hadn’t known she needed to know. And Phineas Taylor Barnum is a riot, at once a charlatan and a genius, and, as Wilson shows, an indispensable force in the creation of our modern world.”
—Thomas Chatterton Williams, author of Losing My Cool: Love, Literature, and a Black Man's Escape from the Crowd

“Wilson's skillful portrayal of the multifarious Barnum is affectionate, lucid, and lively, offering a new portrait of Victorian-era America, particularly its curious and playful side. Highly recommended.”
—Library Journal

“Step right up folks to read Wilson’s new accounting of the life of P. T. Barnum. And what an incredibly productive and long life it was. This adroitly written biography delves into Barnum’s creativity, entrepreneurialism, public engagement, and resilience in the face of personal tragedies.”
—Booklist

Robert Wilson has been an award-winning editor at Preservation, Civilization, and The American Scholar, which he has edited since 2004. He writes often for magazines and newspapers and was on staff at USA Today and The Washington Post. The author of biographies of Mathew Brady, Clarence King, and P.T. Barnum, he lives in Manassas, Virginia.
Loading...
or support indie stores by buying on