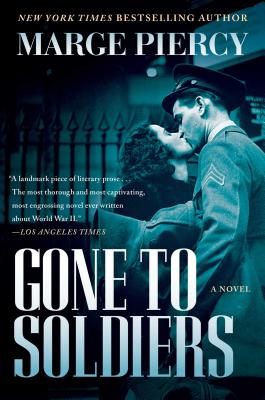 The New York Times bestselling novel of humans in conflict with inhuman events, Gone to Soldiers is “a landmark piece of literary prose…the most thorough and most captivating, most engrossing novel ever written about World War II” (Los Angeles Times).

In this “sweeping epic” (The Philadelphia Inquirer) of World War II, Marge Piercy moves from the United States to Europe, from the North African campaign to New Zealand, from Japan to Palestine, brilliantly recreating the atmosphere of the wartime capitals: the sexual abandon, the luxury and deprivation, the terror and excitement.

Gone to Soldiers interweaves the stories of ten remarkable characters: The New York divorcee and writer of romances-turned-war correspondent... her ex-husband, involved in intelligence for the OSS... Daniel Balaban, whose mission is to crack the Japanese codes... Bernice Coates, who escapes life to fly fighters as a Woman’s Airforce Service Pilot... a painter who parachutes into Nazi-occupied France to fight with the Resistance... Zachary Barrington Taylor, for whom war is the most exciting game... Jacqueline Levy-Monot, who leads Jewish children over the Pyrenees to safety... her sister, Naomi, a troubled adolescent... their cousin, Ruthie Siegal, a touching young woman who tries to keep alive her love for her boyfriend, while working on an assembly line in Detroit... These characters wage memorable and passionate public and private battles, as war casts them into their ultimate dreams and nightmares, daring them to act out their brightest and darkest fantasies.

Written with unmatched authority about the cataclysmic events and passions of war, Gone to Soldiers “is a literary triumph for Marge Piercy and a landmark volume in the literature of war” (USA TODAY).

Marge Piercy has written eight previous novels, including Fly Away Home, Braided Lives, Vida, Woman on the Edge of Time, and Small Changes. She has published ten collections of poetry, including Circles on the Water (her selected poems), Stone, Paper, Knife, and most recently, My Mother’s Body. She coauthored one play with her husband, Ira Wood, the novelist and screenwriter, with whom she lives on Cape Cod.
Loading...
or
Not Currently Available for Direct Purchase