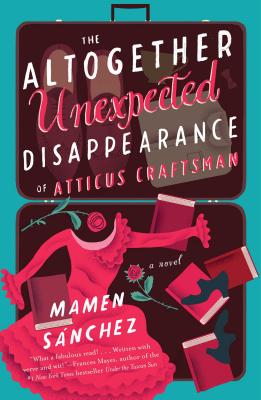 “Full of quirky characters, passionate lovers, and literary references, this novel takes the reader on a playful romp through both Spain and the human soul. You know how a sprinkle of salt makes chocolate taste sweeter? This book seems all the more timeless for the dashes of modernity throughout -- the Spanish detective who references CSI, the wedding band that plays Lady Gaga -- all against the intoxicating backdrop of Madrid and Granada. Delightful!”
— Nichole McCown (E), Bookshop Santa Cruz, Santa Cruz, CA
View the List

A fiendishly fun and charming novel echoing the quirky works of brilliant director Pedro Almodóvar, The Altogether Unexpected Disappearance of Atticus Craftsman follows an uptight Englishman who is sent to Madrid to close a literary magazine and the five fiery, close-knit Spanish women who must devise a plan in order to keep the jobs they love.

Atticus Craftsman never travels without a supply of Earl Grey, an electric kettle, and a teacup—so he makes sure he has packed all three after his father, distinguished publisher of Craftsman & Co., sends him to Madrid to shut down a failing literary magazine, Librarte. But when nobody has heard from him in three months, his father knows something must be very wrong.

Fortunately, Inspector Manchego is on the case. Manchego gets to work unraveling the mystery of the Englishman’s disappearance, but there to block him at every turn are the five fiery and close-knit Spanish women who run Librarte and who will do anything to keep their jobs. From a kidnapping to the “discovery” of the long-lost poems of Federico García Lorca, Manchego and Atticus are taken on a madcap journey through the narrow streets of Madrid and down to the bohemian heart of Andalucía.

A charming tale with linguistic mishaps, literary intrigue, a clash of cultures, and an unexpected romance, The Altogether Unexpected Disappearance of Atticus Craftsman is at once a humorous literary caper and a touching love story, making for an altogether clever and delightfully different read.

International bestselling author Mamen Sánchez is the deputy editor of ¡Hola! Magazine in Spain and editor of ¡Hola! Mexico. She has published five novels; The Altogether Unexpected Disappearance of Atticus Craftsman is the first to be published in English. She lives in Madrid.

Praise For The Altogether Unexpected Disappearance of Atticus Craftsman: A Novel…

“What a fabulous read! It’s rare to find a comic novel anywhere, especially one with such unexpected and appealing characters. I can see it as a great musical, but much more outrageous than MAMMA MIA!. Written with verve and wit!”

“There is no denying the energy and charm that set this novel apart from the pack... A novel that defies categorization.”

“For Anglophiles and lovers of everything British, this literary dive into a genuinely quirky and amusing English mystery will leave you delighted…This laughter-inducing adventure of the journey to save Atticus will leave readers with a warm heart and a craving for English tea.”

“A charming story that works its way into your heart.”

"Humorous, romantic, and utterly charming, The Altogether Unexpected Disappearance of Atticus Craftsman is a getaway in book form,”

"Sanchez knows how to tell a story as well as how to make sure her characters have spark and depth—a real delight."

"A highly entertaining story of corporate fraud, literary intrigue and cross-cultural romance in her fifth novel (and first published in English). With a breezy narrative style and plenty of plot twists, Sánchez crafts a complicated story with a light touch...Mamen Sánchez's novel spins an entertaining story of a hapless Englishman in Spain, caught up in literary mystery and romantic intrigue."

"Filled with literary references, including the ghost of J.R.R. Tolkien, this is a romp perfect for book nerds."
or
Not Currently Available for Direct Purchase
Copyright © 2020 American Booksellers Association