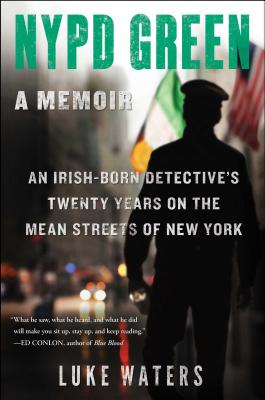 In this gritty, sometimes hilarious, but always brutally honest memoir, Irish immigrant and retired NYPD homicide detective Luke Waters shares the darker and harder side of the police force that “will make you sit up, stay up, and keep reading” (Edward Conlon, author of Blue Blood).

Growing up in the rough outskirts of northern Dublin at a time when joining the guards, the army, or the civil service was the height of most parents’ ambitions for their children, Luke Waters knew he was destined for a career in some sort of law enforcement. Dreaming of becoming a police officer, Waters immigrated to the United States in search of better employment opportunities and joined the NYPD.

Despite a successful career with one of the most formidable and revered police forces in the world, Waters’s reality as a cop in New York was a far cry from his fantasy of serving and protecting his community. Over the course of a career spanning more than twenty years—from rookie to lead investigator, during which time he saw New York transform from the crack epidemic of the ’90s to the low crime stats of today—Waters discovered that both sides of the law were entrenched in crooked culture.

In NYPD Green Waters offers a gripping and fascinating account filled with details from real criminal cases involving murder, theft, gang violence, and more, and takes you into the thick of the danger and scandal of life as a New York cop—both on and off the beat. Balanced with wit and humor, Waters’s account paints a vivid picture of the colorful characters on the force and on the streets and provides an unflinching—often critical—look at the corruption and negligence in the justice system put in place to protect us, showing the hidden side of police work where many officers are motivated not purely by the desire to serve the community, but rather by the “green” earned in overtime, expenses, and allowances.

A multifaceted and engaging narrative about the immigrant experience in America, Waters’s story is also one of personal growth, success, and disillusionment—a rollicking journey through the day-to-day in the New York Police Department.

Luke Waters came from modest beginnings in Finglas on Dublin’s Northside, but nevertheless dreamed of becoming a detective. He initially planned on following in his grandfather’s and brother’s footsteps in joining An Garda Siochana, but in 1985, America beckoned. After some time as a barman, he enrolled in the NYPD, working his way from rookie through Narcotics before becoming a homicide detective. Waters retired from the NYPD in 2011 and now lives in County Cavan with his wife and three children. NYPD Green is his first book.

Praise For NYPD Green: A Memoir…

"Not every weird thing that happens on our streets is harmless, and no one knows this better than retired NYPD homicide detective Luke Waters, who has written an engaging and often utterly hilarious memoir about his successful career with one of the most respected police forces in the world. . . . Waters writes with urgency about the crooked goings on he witnessed on both sides of the blue line. What’s fascinating is the book’s total immersion. . . . Waters is such a natural and engaging narrator, and you can tell right away why certain stories have stayed with him, and even haunted him, years after they concluded."

“Waters may have always dreamed of being a cop, but he’s a natural-born storyteller, as well. In NYPD
Green, he takes the cop’s-beat genre and stretches it into a lively, humorous, entertaining read that
Hollywood might want to prick up its ears at.”

“Waters’s story represents what many officers do daily, their jobs, and all of the gritty stuff that goes with it… this is for fans of true crime, criminal procedure,and memoirs.”

“He tells his immigrant tale with gruff charm.”

“Luke Waters will make you think twice about illegal immigrants. Mr.Waters…takes readers on an inspiring, inside tour of the human toll, and the satisfactions, of becoming a cop.”

“He does…draw attention to important play and apathy issues within the New York Police Department, and his account of 9/11 terrorist attacks and their aftermath makes for riveting reading.”
or
Not Currently Available for Direct Purchase
Copyright © 2020 American Booksellers Association