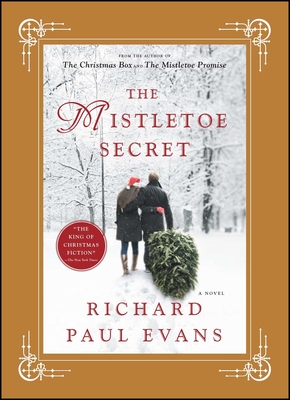 The master of the holiday novel presents the moving story of two people who brave loneliness and loss to find love.

Dear Universe,
Is anyone out there?

Thinking no one is reading, a blogger who calls herself LBH writes about her most personal feelings, especially her overwhelming loneliness. She goes from day to day showing a brave face to the world while inside she longs to know how it would feel if one person cared about her.

Alex Bartlett cares. He’s reading her posts in Daytona Beach, Florida. Nursing his own broken heart and trust issues, he finds himself falling for this sensitive, vulnerable woman whose feelings mirror his own. Following a trail of clues LBH has inadvertently revealed, he discovers that she lives in the small town of Midway, Utah. He makes his way there just after Thanksgiving, determined to find LBH. Maybe she’s a Lisa, Lori, or a Luanne. Instead, he finds a woman named Aria, a waitress at the Mistletoe Diner, who encourages Alex in his search while serving his pie along with some much-needed sympathy and companionship.

Alex finally finds his LBH, a woman who is as beautiful and kind as he imagined she would be. How can he tell her that he knows her secret? What’s holding him back? Could it be his feelings for Aria?

"A sweet story of working through challenges to finding what seems like an elusive and impossible relationship. Evans also includes a cast of quirky and entertaining supporting characters."
— Deseret News

"Count me in."
— Charlotte Observer

"A great re-interpretation of a classic romance."
— Roswell Daily Record

“This novel fits beautifully with the holiday season as two people, both dealing with loneliness, find that love can be found in unexpected places, and it is worth the effort to find it.”
— Dayton Daily News

"For a short and sweet seasonal read, pick up The Mistletoe Secret by Richard Paul Evans...Filled with holiday cheer, this story is marketed to audiences who enjoy Hallmark movies.”
— St. Lawrence Plaindealer

Richard Paul Evans is the #1 bestselling author of The Christmas Box. Each of his more than thirty-five novels has been a New York Times bestseller. There are more than thirty-five million copies of his books in print worldwide, translated into more than twenty-four languages. He is the recipient of numerous awards, including the American Mothers Book Award, the Romantic Times Best Women’s Novel of the Year Award, the German Audience Gold Award for Romance, five Religion Communicators Council Wilbur Awards, The Washington Times Humanitarian of the Century Award, and the Volunteers of America National Empathy Award. He lives in Salt Lake City, Utah, with his wife, Keri, and their five children. You can learn more about Richard on Facebook at Facebook.com/RPEFans, or visit his website RichardPaulEvans.com.
or support indie stores by buying on