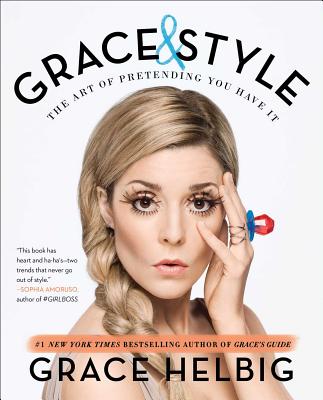 The Art of Pretending You Have It

From the #1 New York Times bestselling author of Grace’s Guide and the host of The Grace Helbig Show on E! comes a beautifully illustrated, tongue-in-cheek book about style that lampoons fashion and beauty guides while offering practical advice in Grace Helbig’s trademark sweet and irreverent voice.

I love clothes, accessories, and makeup as much as the next lady, man, French bulldog in a sweater, or child whose parents dressed her in a couture Halloween costume, but telling people how they should look doesn’t suit me (clothes pun!). I have no authority in that department (I barely even shop in department stores). Instead this is a look at my own silly and nonsensical approach to style, and I promise only some of it is about sweatpants. This book is one part entertainment, one part irreverent fashion fun, and one part personal experience, including:

-My closet staples and jewelry MVPs, and what’s actually in my makeup bag
-All about BLTs and BFFS…that is, Better-Looking T-Shirts and Best Feet Friends
-The bad-hair-day character wheel
-The Ten Commandments of online shopping
-A handy flowchart to help you decide “Should I actually buy this?”
-Red-carpet ridiculousness
-Grace Expectations: What your denim says about you
-And MORE!

I’m not stylish—I’m self-aware. I’m not polished—I’m perceptive. I’m not trendy—but I love trying. Because when it comes down to it, “style” is just a simple way of saying “I showered.”

Praise For Grace & Style: The Art of Pretending You Have It…

“Grace embodies the first cardinal rule of style: don't take yourself too seriously. This book has heart and ha-ha's—two trends that never go out of style.”
— Sophia Amoruso, author of GIRLBOSS

“Grace Helbig doesn’t take fashion (or herself) too seriously, which is what makes her part-parody-part-style-self-help guide GRACE & STYLE as funny, relatable, and, well, awesome as she is.”
— Marie Claire

"YouTube’s 'awkward older sister' is ushering in a new era of female friendship and femininity."
— Buzzfeed

“For those who enjoy Helbig's sense of comedy, they are in for a great ride. A witty and entertaining jab at what's in vogue.”
— Kirkus Reviews

"Grace Helbig is my spirit animal."
— Jenny Han, author of To All the Boys I've Loved Before

Grace Helbig, author of the #1 New York Times bestselling Grace’s Guide, is a comedian, actress, YouTube personality, and host of The Grace Helbig Show on E! She previously hosted DailyGrace on My Damn Channel, before leaving in January 2014 to create her own YouTube channel, it’sGrace, which has more than two million subscribers and 150 million views. Grace is the executive producer and star of the feature film Camp Takota. She is the winner of the People’s Voice Webby Award for Best First Person Format and the Streamy Award for Personality of the Year and Best First-Person Series. Grace has been named one of Variety’s 10 Comics to Watch, Fast Company’s 100 Most Creative People in Business, and Forbes’s 30 under 30.
Loading...
or
Not Currently Available for Direct Purchase