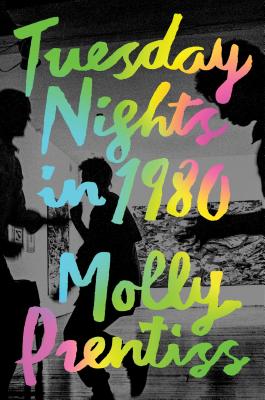 “In one sentence, Ms. Prentiss captures a sense of intoxication and possibility that six seasons of voice-overs from Sarah Jessica Parker never could…Ms. Prentiss concludes her novel on a note that’s both ethereal and brutally realistic. She cauterizes wounds, but they’re still visible and bare. But for her characters—for this promising author—it’s enough.” —The New York Times

Welcome to SoHo at the onset of the eighties: a gritty, not-yet-gentrified playground for artists and writers looking to make it in the big city. Among them: James Bennett, a synesthetic art critic for The New York Times whose unlikely condition enables him to describe art in profound, magical ways, and Raul Engales, an exiled Argentinian painter running from his past and the Dirty War that has enveloped his country. As the two men ascend in the downtown arts scene, dual tragedies strike, and each is faced with a loss that acutely affects his relationship to life and to art. It is not until they are inadvertently brought together by Lucy Olliason—a small town beauty and Raul’s muse—and a young orphan boy sent mysteriously from Buenos Aires, that James and Raul are able to rediscover some semblance of what they’ve lost.

As inventive as Jennifer Egan's A Visit From The Goon Squad and as sweeping as Meg Wolitzer's The Interestings, Tuesday Nights in 1980 boldly renders a complex moment when the meaning and nature of art is being all but upended, and New York City as a whole is reinventing itself. In risk-taking prose that is as powerful as it is playful, Molly Prentiss deftly explores the need for beauty, community, creation, and love in an ever-changing urban landscape.

Praise For Tuesday Nights in 1980…

"It isn't easy to write a novel about art, and even harder to write a novel about art this good, with this much energy and verve and sense of adventure -- and Molly Prentiss has done it. 'Tuesday Nights in 1980' is much more than an accomplished first novel; it is a beautifully written story of creation and transformation, set against a backdrop of urban decay and political violence. I loved this book."
— Daniel Alarcón, author of At Night We Walk in Circles & Lost City Radio

"For those of us who like our novels soulful and brainy, ambitious and deeply felt, Molly Prentiss has given us a first work of fiction to marvel at and then savor. This is a serious young writer in full command of her craft."
— Tom Barbash, author of Stay Up With Me

"Whether her canvas is as broad as the New York City art world in the good old days of glitz and excess, or as small as the quiet, deeply moving connection between brother and sister, Molly Prentiss seems able to render any expression of humanity expertly onto the page. TUESDAY NIGHTS IN 1980 has worlds in it, all wildly appealing, and Molly Prentiss has chops to spare. I can't imagine the soul who won't love this book."
— Marie-Helene Bertino, author of 2 A.M. at the Cat's Pajamas

"An agile, imaginative, knowledgeable, and seductive writer, Prentiss combines exquisite sensitivity with unabashed melodrama to create an operatic tale of ambition and delusion, success and loss, mystery and crassness. Prentiss’ insights into this brash art world are sharply particularized and shrewd, but she also tenderly illuminates universal sorrows, “beautiful horrors,” and lush moments of bliss. In all, a vital, sensuous, edgy, and suspenseful tale of longing, rage, fear, compulsion, and love.
— Booklist (Starred Review)

"First-time novelist Prentiss vividly conjures a colorful love triangle set in the gritty, art-soaked world of downtown New York in 1980. Impressive, too, is her ability to create an atmosphere that crackles with possibility as well as foreboding...a bold and auspicious debut."
— Publishers Weekly

“An intoxicating Manhattan fairy tale… As affecting as it is absorbing. A thrilling debut.”
— Kirkus Reviews (Starred Review)

"Tuesday Nights in 1980 is a sweepingly large and profound story about art, love and actualization, cleanly and beautifully composed... A poetic novel of ambitiously profound considerations, a large-scale drama in a series of small, perfectly rendered moments."
— Shelf Awareness

"We are luckily introduced to three individuals who bravely take the stage, ready to conquer SoHo by storm. Their trek amongst the bright lights is captivating, and readers will be hanging on the edge of their seats."
— RT Book Reviews

“Tuesday Nights in 1980 is a discerning, passionate and humane work.”
— BookPage

"It's 1980 in SoHo, and in this thrilling, vibrant debut, a synesthetic art critic could make or break [an artist named] Raul. And so could a girl named Lucy. Oh, and his own recklessness, too."
— Marie Claire magazine

“The gritty New York art scene of the late ‘70s and early ‘80s pulsed with creative energy, and so does this engaging novel… It portrays an intoxicating world and its raw, ungentrified backdrop—both about to be transformed by greed.”
— People Magazine

“Innovative to the max, this debut novel from Molly Prentiss is a book that I've been raving about to everyone I know…Prentiss will leave you breathless as she plays with form and description in astounding new ways.”
— Bustle

"[Prentiss'] writing is as vivid and sensitive as the pensées of her synesthetic art-critic protagonist...[her] descriptions of the eighties art world ring true on both the texture of the work and its go-go capitalist corruption."
— Vulture

“In one sentence, Ms. Prentiss captures a sense of intoxication and possibility that six seasons of voice-overs from Sarah Jessica Parker never could…. Ms. Prentiss concludes her novel on a note that’s both ethereal and brutally realistic. She cauterizes wounds, but they’re still visible and bare. But for her characters — for this promising author —it’s enough.”
— The New York Times

“[Prentiss’s] sensual linguistic flourishes exquisitely evoke the passions we can feel for people and places we’ve known or are discovering…again and again, the temptation is to underline passages…there are riveting plots and subplots… still the book’s magnificence remains in its shadings, descriptive and emotional… toward the end you’ll find yourself turning the pages slowly, sorry to realize you’re almost finished.”
— O, The Oprah Magazine

“Prentiss’s first novel is about art: making it, loving it and letting it go. And the book itself is a work of artistry…what stands out is a straightforward and familiar story… but the writing—authentic and frenetic—makes the material feel fresh. I’ve been there, done that, but I held my breath the whole way.”
— The New York Times Book Review

"Capturing the zeitgeist of a pivotal time and place, this novel is brash and ambitious, with a dash of magical realism thrown in: think Andy Warhol’s legendary parties when they were still underground. Prentiss has created a remarkable debut."
— Library Journal, Starred Review

"[A] sharp rendering of a city in transition...[a] spirited debut."
— The Guardian

Molly Prentiss is the author of Tuesday Nights in 1980, which was longlisted for the Center for Fiction First Novel Prize and the PEN/Robert W. Bingham Prize for Debut Fiction, and shortlisted for the Grand Prix de Littérature Américaine in France. Her writing has been translated into multiple languages. She lives in Red Hook, New York, with her husband and daughter. You can find her at Molly-Prentiss.com or on Instagram @MollyPrentiss.