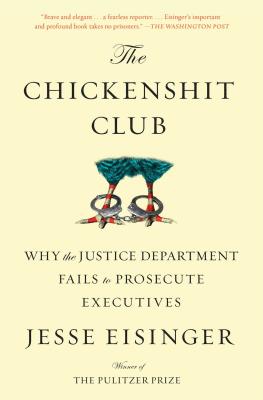 Why the Justice Department Fails to Prosecute Executives

Winner of the 2018 Excellence in Financial Journalism Award

From Pulitzer Prize–winning journalist Jesse Eisinger, “a fast moving, fly-on-the-wall, disheartening look at the deterioration of the Justice Department and the Securities and Exchange Commission…It is a book of superheroes” (San Francisco Review of Books).

Why were no bankers put in prison after the financial crisis of 2008? Why do CEOs seem to commit wrongdoing with impunity? The problem goes beyond banks deemed “Too Big to Fail” to almost every large corporation in America—to pharmaceutical companies and auto manufacturers and beyond. The Chickenshit Club—an inside reference to prosecutors too scared of failure and too daunted by legal impediments to do their jobs—explains why in “an absorbing financial history, a monumental work of journalism…a first-rate study of the federal bureaucracy” (Bloomberg Businessweek).

Jesse Eisinger begins the story in the 1970s, when the government pioneered the notion that top corporate executives, not just seedy crooks, could commit heinous crimes and go to prison. He brings us to trading desks on Wall Street, to corporate boardrooms and the offices of prosecutors and FBI agents. These revealing looks provide context for the evolution of the Justice Department’s approach to pursuing corporate criminals through the early 2000s and into the Justice Department of today, including the prosecutorial fiascos, corporate lobbying, trial losses, and culture shifts that have stripped the government of the will and ability to prosecute top corporate executives.

“Brave and elegant…a fearless reporter…Eisinger’s important and profound book takes no prisoners” (The Washington Post). Exposing one of the most important scandals of our time, The Chickenshit Club provides a clear, detailed explanation as to how our Justice Department has come to avoid, bungle, and mismanage the fight to bring these alleged criminals to justice. “This book is a wakeup call…a chilling read, and a needed one” (NPR.org).

Praise For The Chickenshit Club: Why the Justice Department Fails to Prosecute Executives…

"That the Wall Street titans who blew up the financial system suffered little more than slight reductions in their bonuses only reinforced the perception that the “system” is 'rigged'—with the consequences we know only too well. Many people simply want to live in a world that is fair. As Eisinger shows, this one isn’t."—James Kwak, The New York Times Book Review

“The book is as alarming as it is comprehensive, but it's also gripping. The unfolding of the financial crisis makes for thrilling drama in Eisinger's hands, heightened by the anxiety still felt by all who survived it. He's even able to make white-collar courtroom proceedings and investigations into tax shelters sparkle.…This book is a wakeup call, delivered calmly yet with no shortage of well-reasoned urgency, to a nation whose democratic traditions are being undermined by backroom dealing, deregulation, and the consolidation of corporate power. It's a chilling read, and a needed one.”—NPR.org

“Jesse Eisinger is a master journalist. Revelatory, maddening, and engrossing, the book draws on vivid characters and immersive narratives to chart the rise of the corruption and the inertia within the Justice Department."—Bryan Burrough, co-author of Barbarians at the Gate and author of Days of Rage

“Pulitzer Prize–winning journalist Eisinger does a masterful job of assembling this riveting dossier of the legal scholars, jurists, and elected officials who played a role in turning the U.S. into a nation in which white-collar criminals are celebrated for their cunning instead of incarcerated for their offenses.”—Booklist, Starred Review

“In a spare, elegant and unrelenting narrative, Jesse Eisinger's The Chickenshit Club tackles one of the biggest remaining mysteries about the 2008 financial crisis: Why the American justice system failed miserably in its responsibility to hold Wall Street accountable for its unforgivable behavior in exacerbating the near-meltdown of the global banking system. It's a surprising story of cowardice and greed that will get your blood boiling all over again.”—William D. Cohan, author of Why Wall Street Matters

"This magisterial work is vital reading for everyone concerned by the untrammeled influence of financial institutions and corporations on American society and the nation's political life. Its grim details form a picture of how a system to hold to account the titans of boardrooms has been rendered toothless. Eisinger writes with clarity and style, delivering a story that is by turns fascinating, disturbing, and—dare I say it?—hugely entertaining."—Zia Haider Rahman, author of In the Light of What We Know

“Jesse Eisinger takes us inside the world of federal prosecution with the same detail and doggedness as in his Pulitzer Prize-winning journalism. He carefully tracks the decline in capacity, will, and guts among prosecutors. If you want to see, hear, and understand why no senior executives did jail time after the financial crisis, read this book.”—Frank Partnoy, George E. Barrett Professor of Law and Finance and Director of the Center on Corporate and Securities Law, University of San Diego

"The Chickenshit Club is a fast moving, fly on the wall, disheartening look at the deterioration of the Justice Department and the Securities and Exchange Commission, written sympathetically, thoroughly, but mostly—engagingly. It is a book of superheroes."—The San Francisco Review of Books

Jesse Eisinger is a Pulitzer Prize–winning senior reporter at ProPublica. His work has appeared in The New York Times, The Atlantic, and The Washington Post. Previously, he was the Wall Street Editor of Conde Nast Portfolio and a columnist for The Wall Street Journal, covering markets and finance. He lives in Brooklyn with his wife and their daughters.
Loading...
or support indie stores by buying on