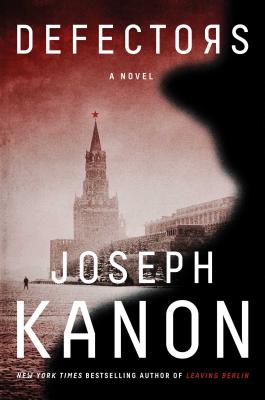 “Fascinating…[Kanon] is a master of the genre...[The] roller-coaster plot will keep you guessing until the final page.” —The Washington Post

From the bestselling author of Istanbul Passage and Leaving Berlin comes a riveting novel about two brothers bound by blood, divided by loyalty.

In 1949, Frank Weeks, fair-haired boy of the newly formed CIA, was exposed as a Communist spy and fled the country to vanish behind the Iron Curtain. Now, twelve years later, he has written his memoirs, a KGB- approved project almost certain to be an international bestseller, and has asked his brother Simon, a publisher, to come to Moscow to edit the manuscript. It’s a reunion Simon both dreads and longs for. The book is sure to be filled with mischief and misinformation; Frank’s motives suspect, the CIA hostile. But the chance to see Frank, his adored older brother, proves irresistible.

And at first Frank is still Frank—the same charm, the same jokes, the same bond of affection that transcends ideology. Then Simon begins to glimpse another Frank, still capable of treachery, still actively working for “the service.” He finds himself dragged into the middle of Frank’s new scheme, caught between the KGB and the CIA in a fatal cat and mouse game that only one of the brothers is likely to survive.

Defectors is the gripping story of one family torn apart by the divided loyalties of the Cold War, but it's also a revealing look at the wider community of defectors, American and British, living a twilit Moscow existence, granted privileges but never trusted, spies who have escaped one prison only to find themselves trapped in another that is even more sinister. Filled with authentic period detail and moral ambiguity, Defectors takes us to the heart of a world of secrets, where no one can be trusted and murder is just collateral damage.

Praise For Defectors: A Novel…

“Kanon [is] an intelligent writer who produces satisfyingly plotted novels that appeal to readers with brains.”
— Philip Kerr

“With his remarkable emotional precision and mastery of tone, Kanon transcends the form. In its subtly romanticized treatment of compromised lives, this book is even better than his terrific previous effort, Leaving Berlin (2015). A blend of Spy vs. Spy and sibling vs. sibling (not since le Carré's A Perfect Spy has there been a family of spooks to rival this one), Kanon reaffirms his status as one of the very best writers in the genre.”
— Kirkus (starred review)

"A finely paced Cold War thriller with [Kanon's] usual flair for atmospheric detail, intriguing characters, and suspensful action...Fans of intelligent suspense wil enjoy trying to figure out whom is deceiving whom."
— Library Journal

“Fascinating . . . [Kanon] is a master of the genre. . . [The] roller-coaster plot will keep you guessing until the final page.”
— The Washington Post

"The critical stock of Joseph Kanon is high, and Defectors will add further lustre to his reputation...There are pleasing echoes here of the “entertainments” of Graham Greene."
— The Guardian

“Engaging. . . . deftly captures the ambience of a city that’s still a wasteland almost four years after the Nazis’ defeat. . . . Kanon keeps the story humming along, enriching the main narrative with vignettes that heighten the atmosphere of duplicity and distrust.”
— The New York Times Book Review

“The old-fashioned spy craft, the many plot twists and the moral ambiguities that exist in all of the characters make Leaving Berlin an intriguing, page-turning thriller.There’s also a star-crossed love story — and an airport farewell — that might remind some readers of Bogie and Bergman. But it’s the author’s attention to historical detail — his ability to convey the sights, sounds and feel of a beaten-down Berlin — that makes this book so compelling.”
— Ft. Worth Star Telegram

"Kanon, who writes his novels at the New York Public Library, conjures from there a Berlin of authentic menace and such hairpin turns that Leaving Berlin evokes comparisons to John LeCarre and Alan Furst. Such good company."
— New York Daily News

“Not for nothing has Kanon – whose previous books include The Good German, which was made into a film starring George Clooney and Cate Blanchett, has been compared to the suspense masters Graham Greene and John LeCarre. He’s certainly in the ballpark.”
— Buffalo News

“A pleasure from start to finish, blending literary finesse with action, this atmospheric historical thriller will appeal not only to Kanon’s many fans but to those who enjoy Alan Furst, Philip Kerr, and other masters of wartime and postwar espionage fiction.”
— Library Journal (starred)

“Another compelling, intellectually charged period piece by Kanon, who works in the shadows of fear as well as anyone now writing.”
— Kirkus Reviews

“Kanon, like Alan Furst, has found a landscape and made it his own. In fact, the two writers make outstanding bookends in any collection of WWII fiction, Furst bringing Paris just before and during the war to vivid life, and Kanon doing the same for Berlin in its aftermath.”
— Booklist

Joseph Kanon is the Edgar Award–winning author of The Accomplice, Defectors, Leaving Berlin, Istanbul Passage, Los Alamos, The Prodigal Spy, Alibi, Stardust, and The Good German, which was made into a major motion picture starring George Clooney and Cate Blanchett. He lives in New York City.
Loading...
or
Not Currently Available for Direct Purchase