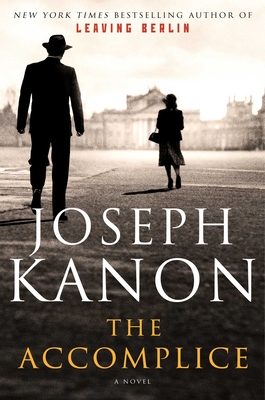 “Joseph Kanon has produced his best effort yet, bringing us along on a mission to the Buenos Aires of 1962 to hunt down a reputedly deceased Nazi concentration camp doctor. With the backdrop of the earlier elaborate capture of Eichmann, this one is a homemade operation reluctantly carried out by the nephew of a camp survivor (the eponymous accomplice) and involving the CIA and Mossad. The Accomplice explores the life of a socialite in Buenos Aires, the conflicting emotions of the target’s daughter and the reluctant spy, the limits of familial loyalty and of trust, and the danger of playing all sides. Emotional zigs and zags leave the reader spellbound as the cat and mouse game closes in on the capture of a detestable unrepentant Nazi.”
— Darwn Ellis, Books on the Common, Ridgefield, CT
View the List

“Gripping and authentic…Kanon’s imagination flourishes [and] the narrative propulsion is clear. A thoroughly satisfying piece of entertainment that extends a tentacle into some serious moral reflection.” —The New York Times Book Review

The “master of the genre” (The Washington Post) Joseph Kanon returns with a heart-pounding and intelligent espionage novel about a Nazi war criminal who was supposed to be dead, the rogue CIA agent on his trail, and the beautiful woman connected to them both.

Seventeen years after the fall of the Third Reich, Max Weill has never forgotten the atrocities he saw as a prisoner at Auschwitz—nor the face of Dr. Otto Schramm, a camp doctor who worked with Mengele on appalling experiments and who sent Max’s family to the gas chambers. As the war came to a close, Schramm was one of the many high-ranking former-Nazi officers who managed to escape Germany for new lives in South America, where leaders like Argentina’s Juan Perón gave them safe harbor and new identities. With his life nearing its end, Max asks his nephew Aaron Wiley—an American CIA desk analyst—to complete the task Max never could: to track down Otto in Argentina, capture him, and bring him back to Germany to stand trial.

Unable to deny Max, Aaron travels to Buenos Aires and discovers a city where Nazis thrive in plain sight, mingling with Argentine high society. He ingratiates himself with Otto’s alluring but wounded daughter, whom he’s convinced is hiding her father. Enlisting the help of a German newspaper reporter, an Israeli agent, and the obliging CIA station chief in Buenos Aires, he hunts for Otto—a complicated monster, unexpectedly human but still capable of murder if cornered. Unable to distinguish allies from enemies, Aaron will ultimately have to discover not only Otto, but the boundaries of his own personal morality, how far he is prepared to go to render justice.

“With his remarkable emotional precision and mastery of tone” (Kirkus Reviews, starred review), Joseph Kanon crafts another compelling and unputdownable thriller that will keep you breathlessly turning the pages.

Praise For The Accomplice: A Novel…

Praise for The Accomplice


“Gripping and authentic . . . Kanon’s imagination flourishes [and] the narrative propulsion is clear.  A thoroughly satisfying piece of entertainment that extends a tentacle into some serious moral reflection.”  —Joseph Finder in The New York Times Book Review

"Fueled by brilliant scenes of dialogue...Kanon’s latest sophisticated thriller is teeming with suspense."—Kirkus

“[A] novel of historical espionage and intrigue.” —Wall Street Journal

“[Kanon] has an astonishing talent for revealing character, age, type and even appearance through dialogue alone.”  —Lee Child, The Guardian, Book of the Year

“Buenos Aires in the 1960s, home to remnants of the Third Reich in exile, is brought chillingly to life. . . . an engrossing read.” —The Financial Times

“Kanon is on adventurous form in his ninth novel, with echoes of Hitchcock’s Notorious… chilling.”  —The Times (London)

“Packed with atmosphere and well-developed plot. . . .a splendid, cerebral read, full of moral and emotional depth.” —Alexander McCall Smith in the New Statesman

“Kanon excels with searching examinations of moral concerns—complicity, guilt, retribution—without ever allowing the pace to flag. The result is that rare thing: an espionage novel which quickens the pulse while providing food for thought.” —The Herald

PRAISE FOR THE WORKS OF JOSEPH KANON:

“With his remarkable emotional precision and mastery of tone, Kanon transcends the form. In its subtly romanticized treatment of compromised lives, this book is even better than his terrific previous effort, Leaving Berlin (2015). A blend of Spy vs. Spy and sibling vs. sibling (not since le Carré's A Perfect Spy has there been a family of spooks to rival this one), Kanon reaffirms his status as one of the very best writers in the genre.” —Kirkus (starred review)

“Fascinating . . . [Kanon] is a master of the genre. . . [The] roller-coaster plot will keep you guessing until the final page.”
— The Washington Post

"The critical stock of Joseph Kanon is high, and Defectors will add further lustre to his reputation...There are pleasing echoes here of the “entertainments” of Graham Greene."
— The Guardian