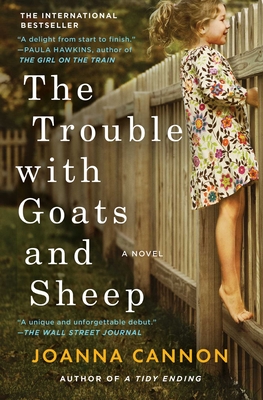 The Trouble with Goats and Sheep

“Best friends Grace and Tilly spend England's sweltering summer of 1976 sleuthing for clues to uncover the reason for their neighbor's disappearance. They go from house to house, neighbor to neighbor, investigating as only guileless little girls can do. While they're at it, they also look for god in the most unusual places. As the mystery of the neighborhood is slowly revealed, so are the many secrets behind every door on the avenue. If you loved A Man Called Ove, you will love The Trouble With Goats and Sheep. Funny, quirky and profound!”
— Cathy Langer (M), Tattered Cover Book Store, Denver, CO
View the List

“I loved this book. It's one of those books that you just want to give to everybody.” —Nancy Pearl on NPR’s Morning Edition

“An astute, engaging debut” (Publishers Weekly), The Trouble with Goats and Sheep is a quirky and utterly charming tale of a community in need of reconciliation and two girls learning what it means to belong.

England, 1976. Mrs. Creasy is missing and the Avenue is alive with whispers. The neighbors blame her sudden disappearance on the heat wave, but ten-year-olds Grace and Tilly aren’t convinced, and decide to take matters into their own hands.

Spunky, spirited Grace and quiet, thoughtful Tilly go door to door in search of clues. The cul-de-sac starts to give up its secrets, and the amateur detectives uncover more than they ever imagined. A complicated history of deception begins to emerge—everyone on the Avenue has something to hide.

During that sweltering summer, the lives of all the neighbors begin to unravel. The girls come to realize that the lies told to conceal what happened one fateful day about a decade ago are the same ones Mrs. Creasy was starting to peel back just before she disappeared...

“A thoughtful tale of loyalty and friendship, family dynamics and human nature” (Kirkus Reviews), this glorious debut is part coming-of-age story, part mystery. The Trouble with Goats and Sheep radiates an unmistakable warmth and intelligence and is “rife with tiny extraordinaries” (The New York Times Book Review). “Joanna Cannon is an author to watch” (Booklist, starred review).

Praise For The Trouble with Goats and Sheep: A Novel…

“Cannon’s intense specificity captures a world in amber, permitting intimate access to the pantries, gardens, and garages of Britain’s past… a microcosm rife with tiny extraordinaries… Cannon is a mapmaker; her stories create an atlas... As in George Perec’s Life: A User’s Manual, the secrets of each household come to light.”
— Samantha Hunt

"This cautionary tale of a suburban power struggle is charming and truthful, at once ambitious and intimate, with playful prose that reveals an intriguing mind at work."
— James Hannah, author of The A to Z of You and Me

"A masterfully constructed plot... This understated, somewhat quirky debut novel is remarkable for its structure, characterizations, pitch-perfect prose, touches of humor, and humanity. Cannon is an author to watch."

"Reminiscent of Scout Finch with shades of Flavia de Luce, 10-year-olds Grace and Tilly spend the sweltering summer of 1976 investigating two mysteries... Quirky characters, playful language and humor offset the tension. The child detectives may have gotten themselves into more than they bargained for, but their adventure leads their street toward closer community and the novel to an upbeat conclusion."
— Cheryl Krocker McKeon

"A fabulous first novel... laced with wonderful, wonderful touches of humor, including an absolutely priceless scene where Tilly and Grace make one of their regular trips to the library and are looking for something good to read. I loved this book. It's one of those books that you just want to give to everybody." --Nancy Pearl on NPR's Morning Edition

Joanna Cannon is a psychiatrist with a degree from Leicester Medical School. She lives in England’s Peak District with her family and her dog. She is the author of Three Things About Elsie and The Trouble with Goats and Sheep, a top ten bestseller in the UK.
Loading...
or support indie stores by buying on