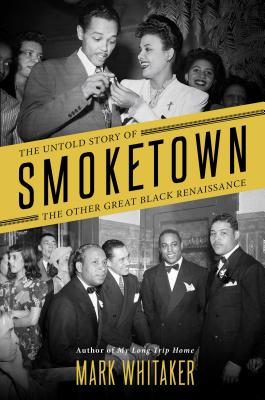 The Untold Story of the Other Great Black Renaissance

“Smoketown brilliantly offers us a chance to see this other black renaissance and spend time with the many luminaries who sparked it…It’s thanks to such a gifted storyteller as Whitaker that this forgotten chapter of American history can finally be told in all its vibrancy and glory.”—The New York Times Book Review

The other great Renaissance of black culture, influence, and glamour burst forth joyfully in what may seem an unlikely place—Pittsburgh, PA—from the 1920s through the 1950s.

Today black Pittsburgh is known as the setting for August Wilson’s famed plays about noble but doomed working-class strivers. But this community once had an impact on American history that rivaled the far larger black worlds of Harlem and Chicago. It published the most widely read black newspaper in the country, urging black voters to switch from the Republican to the Democratic Party and then rallying black support for World War II. It fielded two of the greatest baseball teams of the Negro Leagues and introduced Jackie Robinson to the Brooklyn Dodgers. Pittsburgh was the childhood home of jazz pioneers Billy Strayhorn, Billy Eckstine, Earl Hines, Mary Lou Williams, and Erroll Garner; Hall of Fame slugger Josh Gibson—and August Wilson himself. Some of the most glittering figures of the era were changed forever by the time they spent in the city, from Joe Louis and Satchel Paige to Duke Ellington and Lena Horne.

Mark Whitaker’s Smoketown is a captivating portrait of this unsung community and a vital addition to the story of black America. It depicts how ambitious Southern migrants were drawn to a steel-making city on a strategic river junction; how they were shaped by its schools and a spirit of commerce with roots in the Gilded Age; and how their world was eventually destroyed by industrial decline and urban renewal. Whitaker takes readers on a rousing, revelatory journey—and offers a timely reminder that Black History is not all bleak.

Praise For Smoketown: The Untold Story of the Other Great Black Renaissance…

“Smoketown brilliantly offers us a chance to see this other black renaissance and spend time with the many luminaries who sparked it as well as the often unheralded journalists who covered it…It’s thanks to such a gifted storyteller as Whitaker that this forgotten chapter of American history can finally be told in all its vibrancy and glory.”
— The New York Times Book Review

“Terrific, eminently readable . . . fascinating . . . Smoketown will appeal to anybody interested in black history and anybody who loves a good story. In short, anybody.”
— The Washington Post

“Pittsburgh was one of the country’s citadels of black aspiration in music, sports, business and culture. This is the world affectionately summoned back to life with zest and passion by Mark Whitaker in Smoketown. There’s something close to enchantment to be found in the stories Whitaker unpacks piece by piece, name by glittering name. Black excellence, black talent and black achievement were of such incandescence in Pittsburgh for most of the late century’s first half that one imagines them piercing through the thickest mesh of soot and smog draping the city during its coal-and-steel heyday. . . . Some of these stories have had books of their own. Others seem poised for books of their own. For now, this one, fashioned with love and rigor, provides these stories a sturdy, substantial home.”
— USA Today

"[A] rewarding trip to a forgotten special place and time...With the publication of Mr. Whitaker’s enjoyable and long-overdue time trip back to Smoketown, he and Simon & Schuster have given the Hill District and its talented ghosts the national props they’ve always deserved."
— Pittsburgh Post-Gazette

“An enticing history of the black culture of mid-20th century Pittsburgh, filled with engaging musicians, athletes, and journalists.”
— The Guardian

“Whitaker shines a well-deserved and long-overdue spotlight on this city within a city.”
— Publishers Weekly

“A thoroughly researched celebration of the black community and culture in Pittsburgh from the 1920s through the 1950s. Pittsburgh’s black residents, Whitaker argues, offered cultural contributions that significantly shaped black history—and the nation. With the diligence of a seasoned anthropologist, Whitaker spotlights the city’s stunning feats of black achievement and resilience through the lens of his extensive cast of influencers and icons. While some of the names may be unfamiliar, each subject’s narrative is a nuanced portrayal meant to challenge our country’s often narrow, dismissive version of black history. Cultural heavyweights such as boxer Joe Louis are treated as historical catalysts rather than extraordinary oddities. Black history, as evident in the cultural renaissance of Pittsburgh, is not defined by oppression. Despite the setbacks of systemic racism and discrimination, black excellence flourishes regardless of the white gaze.”

“The fascinating and never-before-told story of Pittsburgh’s black renaissance—a vibrant and creative community that produced a great black newspaper, a great black baseball team, a great black industrial tycoon, a great black painter, a great black playwright, and some of the greatest black musical talent in America.   Thank you, Mark Whitaker.”
— Gail Lumet Buckley, author of The Hornes and The Black Calhouns

“Mark Whitaker says his remarkable mid-twentieth century Pittsburgh “was a black version of the story of early twentieth-century Vienna.” Mr. Whitaker is so riveting a storyteller that the reader even wonders if Belle Epoque Vienna had the equivalent of a Billy Eckstine, Mary Lou Williams, Billy Strayhorn, Joe Louis, or an August Wilson.”
— David Levering Lewis, Pulitzer Prize-winning biographer of W.E.B. Du Bois

“Mark Whitaker has given Pittsburgh's wondrously rich black culture its due at long last.

Smoketown is illuminating history and an absolute delight to read.”
— David Maraniss, author of Once in a Great City: A Detroit Story

“Who knew that Pittsburgh had an African American renaissance as vibrant as Harlem's and arguably more consequential? Mark Whitaker knew, and he rescues from unjust obscurity an American episode that continues to reverberate.”
— George F. Will, syndicated columnist

“Who knew that Pittsburgh had an African American renaissance as vibrant as Harlem's and arguably more consequential? Mark Whitaker knew, and he rescues from unjust obscurity an American episode that continues to reverberate.”
— George F. Will, syndicated columnist

“That Smoketown is a joy to read shouldn't obscure the seriousness of its intentions. In vividly recreating the mid-twentieth-century heyday of black Pittsburgh, an almost magical locale for journalism, sports, music, politics, and business, Whitaker is also offering an alternate version of African-American history. This is a story of strength, pride, and achievement, where racism is never absent but also never more powerful than the strong will of his large, fascinating cast of characters.”
— Nicholas Lemann, author of The Promised Land: The Great Migration and How It Changed America

Mark Whitaker is the author of the critically acclaimed memoir, My Long Trip Home, and Smoketown. The former managing editor of CNN Worldwide, he was previously the Washington bureau chief for NBC News and a reporter and editor at Newsweek, where he rose to become the first African-American leader of a national newsweekly.
Loading...
or
Not Currently Available for Direct Purchase