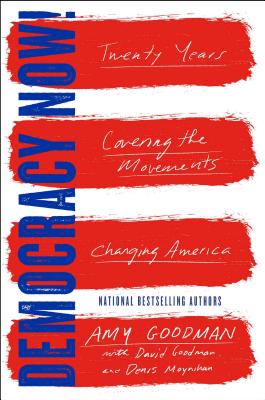 A celebration of the acclaimed television and radio news program Democracy Now! and the extraordinary movements and heroes who have moved our democracy forward.

In 1996 Amy Goodman began hosting a show on Pacifica Radio called Democracy Now! to focus on the issues and movements that are too often ignored by the corporate media. Today Democracy Now! is the largest public media collaboration in the US, broadcasting on over 1,400 public television and radio stations around the world, with millions accessing it online at DemocracyNow.org. Now Amy, along with her journalist brother, David, and co-author Denis Moynihan, share stories of the heroes—the whistleblowers, the organizers, the protesters—who have brought about remarkable change.

This important book looks back over the past two decades of Democracy Now! and the powerful movements and charismatic leaders who are re-shaping our world. Goodman takes the reader along as she goes to where the silence is, bringing out voices from the streets of Ferguson to Staten Island, Wall Street, South Carolina to East Timor—and other places where people are rising up to demand justice. Democracy Now! is the modern day underground railroad of information, bringing stories from the grassroots to a global audience.

"A sweeping look at both the origins of the show and its unique role in American political life. It’s also a scathing critique of corporate media and its corrosive culture."—Sean Illing, Salon

"Democracy Now! presents the voices of people prevented from earning livable wages, fired for organizing for labor rights, incarcerated unjustly, bombed illegally, discriminated against, foreclosed on, spied upon, disenfranchised and deported. They call us to the better angels of our democracy."—Jim Swearingen, The National Book Review

“If you’re of the opinion that the big events and pivotal moments we’ve been seeing over the last decade or two is overblown or easily dismissed, read this book and see how the salient details of the American political and cultural landscape have unfolded in the Internet Age. Likely Democracy Now! was covering it. This work will inform and enlighten you.”—Pittsburgh Post Gazette

Amy Goodman is the host and executive producer of Democracy Now! An acclaimed international journalist, she has won the Right Livelihood Award, widely known as the Alternative Nobel Prize; a lifetime achievement award from Harvard’s Nieman Foundation for Journalism; the George Polk Award; Robert F. Kennedy Prize for International Reporting; and the Alfred I. duPont-Columbia Award. Amy is the New York Times bestselling author, with Denis Moynihan, of The Silenced Majority and Breaking the Sound Barrier; and with David Goodman, of Democracy Now!, Exception to the Rulers, Static, and Standing Up to the Madness. She is a syndicated columnist for King Features.

David Goodman is an independent journalist, contributing writer for Mother Jones, host of the radio show, The Vermont Conversation, and the bestselling author of ten books. The author of Fault Lines: Journeys Into the New South Africa, and Democracy Now! (with Amy Goodman), his work has also appeared in The Washington Post, The New York Times, Los Angeles Times, Outside, The Christian Science Monitor, The Boston Globe, The Nation, and numerous other publications. He lives in Vermont.

Denis Moynihan has worked with Democracy Now! since 2000. He is a bestselling author and a syndicated columnist with King Features. He lives in Colorado, where he founded community radio station KFFR 88.3 FM in the town of Winter Park.
Loading...
or
Not Currently Available for Direct Purchase