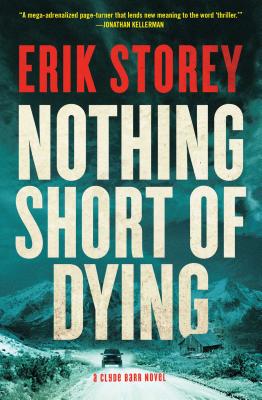 Nothing Short of Dying (Paperback)

Hailed as a "mega-adrenalized page turner" by Jonathan Kellerman and praised by The New York Times Book Review for its “tough-as-they-come hero [brought to life by] a first-time novelist who really knows how to handle himself,” Nothing Short of Dying imagines a lethal high-plains drifter in the modern West racing to rescue his sister from an army of killers.

Sixteen years. That’s how long Clyde Barr has been away from Colorado’s thick forests, alpine deserts, and craggy peaks, running from a past filled with haunting memories. But now he’s back, having roamed across three continents as a hunter, adventurer, soldier of fortune, and most recently, unjustly imprisoned convict. But once again, his past is reaching out to claim him.

By the light of a flickering campfire, Clyde receives a frantic phone call from his sister Jen. She has just pleaded with him to come rescue her when the line goes dead. Clyde doesn’t know how much time he has, or where Jen is located, or even who has her. All he knows is that nothing short of dying will stop him from saving her. Joining Clyde in his against-all-odds quest is a young woman named Allie whose motivations for running this gauntlet are fascinatingly complex. As the duo races against time to save Jen, it is Allie who gets Clyde to see what he has become and what he can still be.

Vivid with the hues and scents of Colorado’s backcountry—and thought provoking in its exploration of how past, present, and future collide to test resolve—Nothing Short of Dying is “a nerve-wracking, nail-biting roller coaster" (Washington Times), a propulsive, action-driven race against the clock.

Erik Storey is a former ranch hand, wilderness guide, dogsled musher, and hunter. He spent his childhood summers growing up on his great-grandfather’s homestead or in a remote cabin in Colorado’s Flat Tops wilderness. He has earned a number of sharpshooter and marksman qualifications. He is the author of three Clyde Barr novels, Nothing Short of Dying, A Promise to Kill, and the forthcoming Leave No One Alive. He and his family live in Grand Junction, Colorado.

Praise For Nothing Short of Dying: A Clyde Barr Novel…

“A nerve-wracking, nail-biting quest … A roller-coaster of a read, fast-paced with surprising twists and turns … Original. Absorbing. Suspenseful. Full of action. Plausible. Realistic. A very well-written work marked by truly exceptional backstory development … All this plus the author truly knows and loves Colorado’s wilderness and writes about it beautifully.”
—Washington Times

“Erik Storey’s writing is exceptional. This is a splendid debut, harsh and gripping throughout.”
—The Times (of London)

“The tough-as-they-come hero [is the creation of] a first time novelist who really knows how to handle himself in these thickets…Storey knows and loves this rugged territory.”
—New York Times Book Review

“Jump on the Clyde Barr train now; you’ll have less catching up to do later.”
—BookReporter

"May be the year's best debut thriller. It leaps at you like a wolf."
—William Kent Krueger, New York Times bestselling and Edgar Award-winning author of Ordinary Grace and Heaven's Keep

“A whirlwind debut that sucks readers in and keeps them spinning.”
—Lori Armstrong, author of Hallowed Ground

"This man is a born storyteller!”
—Jeffery Deaver, #1 international bestselling author of The Bone Collector and The Coffin Dancer

“A thrill ride—buckle up and hang on.”
—Craig Johnson, New York Times bestselling author of the Longmire Mysteries, basis of the Netflix drama Longmire

“Barr is the baddest of them all.”
—Scott Sigler, New York Times bestselling author of Contagious and Alive

“Storey's somebody to watch.”
—Robert Ferrigno, New York Times bestselling author of The Horse Latitudes and Prayers for the Assassin

“Gritty…authentic…a terrific page-turner.”
—Howard Roughan, #1 New York Times bestselling co-author of Truth or Die and Honeymoon, and author of The Up and Comer