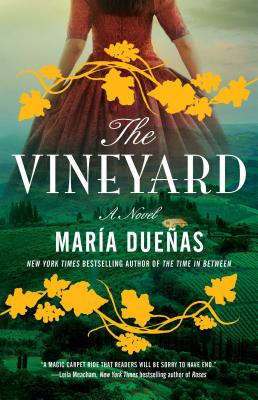 New York Times bestselling author Maria Dueñas returns with The Vineyard, a magnificent story “destined to become a classic” (Armando Lucas Correa, bestselling author of The German Girl) about ambition, heartbreak, and desire set in Mexico, Cuba, and Spain in the 1860s—perfect for fans of Kate Morton and Kristin Hannah.

Mauro Larrea’s fortune, the result of years of hardship and toil, comes crashing down on the heels of a calamitous event. Drowning in debt and uncertainty, he gambles the last of his money on daring ploy that wins him a neglected house and a vineyard in Spain, an ocean away. He journeys to Jerez de la Frontera in Andalusia with every intention of selling the property and returning to Mexio—until Soledad Montalvo, the wife of a London wine merchant, bursts into his life, determined to regain the property which was her family’s legacy. With his plans derailed, Larrea glimpses an opportunity in the flourishing sherry trade and finds himself increasingly drawn to the rich, intoxicating culture of his new surroundings. As his feelings for Soledad ripen into a consuming passion, he vows to restore the vineyard to its former glory, setting the stage for a future he never could have imagined.

Moving from the turbulent young Mexican republic to flourishing city of Havana, and onward to the fertile vineyards of Jerez as the wine trade with England is transforming the Andalusian city, María Dueñas’s new novel spans the New World and the Old. Her tale of family intrigue vividly conjures the noise and grit of silver mines, the sophistication of the Mexican capital, and the earthier lure of ancient vineyards and magnificent cities whose splendor has faded. Here is an “evocative, tender, and lush” (Diana Gabaldon, #1 New York Times bestselling author) story of courage in the face of adversity and of a destiny forever altered by the force of passion.

Praise For The Vineyard: A Novel…

“It beams readers with pinpoint accuracy to the heart and soul of 1860s Mexico, Cuba, and Spain on a magic carpet ride that they will be sorry to have end.”
— Leila Meacham, New York Times bestselling author of Roses

“Dueñas is a gifted writer. The Vineyard is destined to become a classic.”
— Armando Lucas Correa, international bestselling author of The German Girl

"This sprawling tale will charm fans of historical romance."
— Kirkus

"Dueñas capably reveals the grace of second chances, as Larrea’s hard work overcomes a cruel twist of fate. There is despair; there is betrayal; there is romance and triumph. Dueñas’s many fans as well as readers who appreciate well-researched historical fiction will find The Vineyard appealing."
— Booklist

"This sprawling family saga is filled with romance, intrigue, adventure, and a bit of melodrama. It’s a leisurely yet always entertaining read that will appeal to lovers of Isabel Allende’s Zorro."
— Library Journal

“Here’s an all-encompassing saga of one man’s sacrifice, tragedy, courage, and passion. Dueñas builds her tale carefully and sets the stage with lush descriptions of Mexico, Cuba, and the glorious vineyards of Andalusia, Spain. It is the pictures that Dueñas paints that draw readers into the heart of her character’s journey through three stages. Heartwrenching yet uplifting, this beautifully rendered story will linger in readers’ minds.”
— RT Book Reviews

"A wonderful novel, in the old and good tradition, with intrigue, love, mystery and tender, audacious and clean-cut characters."
— Mario Vargas Llosa, recipient of the 2010 Nobel Prize in Literature

"María Dueñas is a true storyteller. She weaves a spell, conjuring the heat and the glamour, the hardship and the thrill of Morocco and Spain in the late 1930s."
— Kate Morton, New York Times bestselling author of The Lake House
or
Buy Here
Copyright © 2020 American Booksellers Association