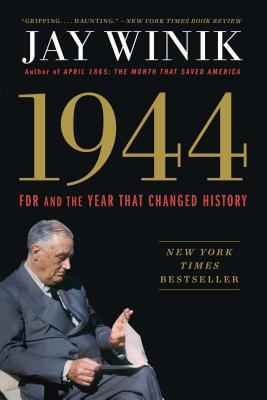 FDR and the Year That Changed History

Jay Winik brings to life in “gripping” detail (The New York Times Book Review) the year 1944, which determined the outcome of World War II and put more pressure than any other on an ailing yet determined President Roosevelt.

1944 was a year that could have stymied the Allies and cemented Hitler’s waning power. Instead, it saved those democracies—but with a fateful cost. Now, in a “complex history rendered with great color and sympathy” (Kirkus Reviews, starred review), Jay Winik captures the epic images and extraordinary history “with cinematic force” (Time).

1944 witnessed a series of titanic events: FDR at the pinnacle of his wartime leadership as well as his reelection, the unprecedented D-Day invasion, the liberation of Paris, and the tumultuous conferences that finally shaped the coming peace. But millions of lives were at stake as President Roosevelt learned about Hitler’s Final Solution. Just as the Allies were landing in Normandy, the Nazis were accelerating the killing of millions of European Jews. Winik shows how escalating pressures fell on an infirm Roosevelt, who faced a momentous decision. Was winning the war the best way to rescue the Jews? Or would it get in the way of defeating Hitler? In a year when even the most audacious undertakings were within the world’s reach, one challenge—saving Europe’s Jews—seemed to remain beyond Roosevelt’s grasp.

“Compelling….This dramatic account highlights what too often has been glossed over—that as nobly as the Greatest Generation fought under FDR’s command, America could well have done more to thwart Nazi aggression” (The Boston Globe). Destined to take its place as one of the great works of World War II, 1944 is the first book to retell these events with moral clarity and a moving appreciation of the extraordinary actions of many extraordinary leaders.

Praise For 1944: FDR and the Year That Changed History…

"To understand the 20th century, you need to understand 1944. With his usual great research and storytelling talent, Jay Winik makes that dramatic year come alive."
--Walter Isaacson, author of The Innovators and Steve Jobs

"Posing as a book on President Roosevelt in 1944, this extraordinary book is in fact a compelling, comprehensive history of the Second World War told from FDR’s point of view, certainly, but also featuring profound insights into Churchill, Hitler, the ordinary soldiers and civilians, and the monstrous suffering of Europe’s Jews. The width of the canvas is astonishing. 1944 might have been, as Winik calls it, 'The year that changed history', but 1944 is a book that will change history-writing."
--Andrew Roberts, author of Masters and Commander: How Four Titans Won the War in the West, 1941-1945

"A gifted storyteller with a proven talent for finding universal meaning in particular historical moments, Jay Winik has now turned his attention to 1944, an epochal year that shaped the way we live now. With grace and energy, he tells a vital story well, bringing those distant days back to vivid life. This is a terrific read."
--Jon Meacham, author of Franklin and Winston and the Pulitzer-winning American Lion

"Jay Winik is a master storyteller and in 1944 he has a horrifying, mesmerizing story to tell. FDR was a great hero of World War II, but as Winik shows, even the wisest of men can have moral blind spots. With drama, power, and passion, Winik brings to life a magnificent and terrible time."
--Evan Thomas, author of Ike's Bluff and Being Nixon

"Jay Winik is a master of the historical moment. His April 1865 distilled the Civil War and Reconstruction into a few fraught weeks. 1944 fittingly encompasses more time, as his canvas is larger, but it delivers the same insight and impact, in similarly vivid and compelling prose. A wonderful book!"
--H. W. Brands, author of Traitor to His Class: The Privileged Life and Radical Presidency of Franklin Delano Roosevelt

“An accomplished popular historian unpacks the last full year of World War II and the excruciatingly difficult decisions facing Franklin Roosevelt. . . . Winik asks whether, by focusing so wholly on winning the war, Roosevelt missed 'his own Emancipation Proclamation moment,' the chance to make the war about something bigger, specifically ‘the vast humanitarian tragedy occurring in Nazi-controlled Europe.’ . . .  The author's fair assessment of the evidence, detailed scene-setting, deft storytelling, and sure-handed grasp of this many-stranded narrative will inspire any reader to rethink this issue. Do we ask too much of Roosevelt or too little? A complex history rendered with great color and sympathy.”
--Kirkus Reviews (starred review)

"Nimbly toggling between hemispheres, Winik knits familiar WWII headlines with surprising details from leaders' lives. . . . His recounting of concentration-camp logistics is haunting, and the tales of those who tried desperately to stop the mass murder have cinematic force. . . . Winik's vision of an alternate universe--in which an earlier end to Auschwitz creates a world that prizes goodness--is hard to buy yet easy to crave. But . . . there's no reason history can't change the future."
--Lily Rothman, Time

"Compelling. . . . This dramatic account highlights what too often has been glossed over—that as nobly as the Greatest Generation fought under FDR’s command, America could well have done more to thwart Nazi aggression."
--The Boston Globe

“Jay Winik is a master of the annus magnus school of history, in which the past can best be fathomed and told by ferreting out individual seminal years. . . . Winik is an effective storyteller. He expertly weaves together several strands of his narrative. . . . His riveting story of the abject moral indifference to what we now know was good enough evidence of what was going on at such places as Auschwitz and Treblinka makes his indictment all the more powerful.”
--National Review

"[Winik is] a lively storyteller with a nice eye for detail. . . . If you aren't familiar with the terrible tale of the Roosevelt administration's unwillingness to take decisive action to prevent the mass slaughter of European Jewry, you're likely to be shocked by much of what you read in 1944."
--The Weekly Standard

"Jay Winik puts his own mark on the events of 1944 with this new volume, building on his earlier bestsellers. . . . As he sets the stage for the events of 1944, Winik paints a very dark and unflattering picture of the Allied reaction to the increasing German discrimination and harassment of Jews in Germany and occupied countries, showing the incredible bureaucratic indifference to the plight of European Jews fleeing for safety. . . . A shocking spin on the usual historiography of 1944 as the year the Allies decisively turned the war toward victory."
--New York Journal of Books

"Covers the broad sweep of the war in one volume, with sprightly prose and a few literary touches. . . . 1944 also succeeds because Winik keeps the fascinating, poignant figure of Roosevelt in the spotlight."
--Miami Herald

"[Winik gives] a heartbreaking description of the horrors of Auschwitz. . . . An important book."
--Lincoln Journal Star

"Jay Winik's ambitious new book addresses the destruction of the Jews during the Second World War. . . . Powerful. . . . Winik admires FDR, but he tempers his respect with stern criticisms of a president famed for his humanitarianism who nevertheless failed to act decisively when presented with incontrovertible facts."
--Newsday

"[An] animated tale of how the Holocaust tragically shifted into highest gear, even as the Allies turned the tide in the second world war. . . . Mr. Winik [is] a talented storyteller."
--The Economist

"In his new book, 1944: FDR and the Year That Changed History, author Jay Winik wallops us with America's shortcomings under President Franklin Roosevelt in responding to the Jewish emergency."
--Chicago Tribune

"Many books have been written about World War Two. Many more about the Holocaust. But few, if any, have told both stories in parallel to such dramatic and awful effect. . . . in compelling detail and with a clear sense of how events seemed at the time."
--BookFilter.com

“Monumental. . . . Winik has the mesmerizing gift of broad analysis that culminates in a clear vision of those war years 70 years ago. . . . Read it and weep isn’t the moral of 1944. Read it and learn, however, is the key.”
--NBC2.com

"Winik . . . turns his attention to Franklin Delano Roosevelt in this fast-paced history of the year the world was at a crossroads. . . . 1944 is a bracing war story about an inspiring president who led the Allies to victory but missed opportunities to save countless lives."
--Jane Ciabattari, BBC

“Winik uses the same novelistic approach as he did in April 1865: The Month That Saved America (Harper, 2001), to draw readers into the high drama of that pivotal period of WWII.”
--Publishers Weekly

"As he did so masterfully in April 1865, Winik focuses on one crucial period and illuminates the ways in which that time affected the course of American history."
--BookPage

"It’s gratifying to hear someone called a public historian, as the Baltimore Sun said of Winik. . . . Here he follows up his New York Times best-selling The Great Upheaval: America and the Birth of the Modern World with a study of one crucial year in the wartime administration of Franklin Delano Roosevelt."
--Barbara Hoffert, Library Journal

"Brilliantly constructed. . . . Winik is a masterful storyteller. . . . The book serves as a reminder of the dangers of demagoguery [and] may enlighten a generation."
--Buffalo News

“Given the recent tragedies relating to Syrian and other refugees from around the world, Jay Winik’s 1944: FDR and the Year That Changed History is a timely read. You will also find confirmation that history does repeat itself, tragically in this case.”
--Orange County Register

The author of the #1 and New York Times bestselling April 1865 and the New York Times bestsellers 1944 and The Great Upheaval, Jay Winik is renowned for his creative approaches to history. The Baltimore Sun called him “one of our nation’s leading public historians.” He is a popular public speaker and a frequent television and radio guest. He has been a regular contributor to The Wall Street Journal book review section, as well as to The New York Times. His many national media appearances include the Today show, Good Morning America, World News Tonight, NPR, and FOX News. He is a former board member of the National Endowment for the Humanities and was the historical advisor to National Geographic Networks.
Loading...
or support indie stores by buying on
(This book is on backorder)