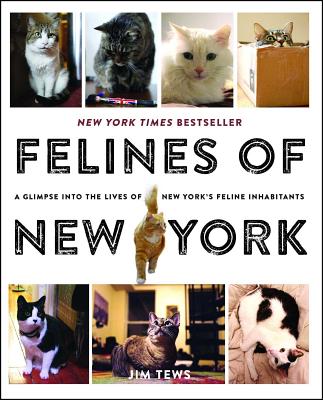 A Glimpse Into the Lives of New York's Feline Inhabitants

Where New York humans are accomplished, interesting, thoughtful, creative, and even sometimes tragic figures, the cats are simply cats. They do not stand in line for brunch, or have season tickets to the Met, or go indoor-rock climbing in Brooklyn. They do not shop at thrift stores or nibble finger sandwiches at the Russian Tea Room. And they certainly do not give a flying f*ck about the Yankees.

No, the felines of New York bathe, purr, bask languidly in the sun, and occasionally cast baleful glances at the humans who provide them food and shelter. They are proof that behind every New Yorker, there lays a cat just waiting to destroy their IKEA futon and then eat their faces off when they die.

Jim Tews made his stand-up television debut on Last Comic Standing and was featured in an episode of Louie in 2014. Previously he was one of 2011’s New Faces at Just for Laughs Montreal and has performed in the Bridgetown Comedy Festival, the Eugene Mirman Comedy Festival, and SF Sketchfest. He recently created/cowrote and starred in The Undone Sweaters web series about a sociophobic Weezer cover band, which was featured on Funny or Die and Nerdist.com. He also created the HBO Labs’s web series The Opener and recently directed a feature length documentary about Cleveland’s independent comedy scene called Make Fun. Felines of New York is his first book, and perhaps his greatest achievement to date.
Loading...
or
Not Currently Available for Direct Purchase