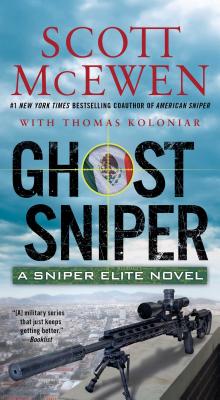 Bob Pope, the director of an American secret intelligence antiterrorism program, has lost contact with his most trusted operative, Navy Master Chief Gil Shannon, fearing him dead when a mission to take out a Swiss banker channeling funds to Muslim extremists goes awry.

Now an American politician and her team have been assassinated in Mexico City by the Ghost Sniper—an American ex-military gunman-for-hire employed by Mexico’s most ruthless drug cartel—and Pope must turn instead to retired Navy SEAL Daniel Crosswhite and brand-new Sniper Elite hero, ex–Green Beret Chance Vaught, in order to track down the Ghost Sniper and expose the corrupt officials behind this murderous international plot!

“Thrilling...the rousing plot and bloodstained action are strictly on-target....Keep[s] the suspense high right through to the surprise ending!"
— —Publishers Weekly

“McEwen’s fiction isn’t far from the truth. Few writers I know would have the guts to go there. McEwen does, and so should you.”
— —Brandon Webb, former Navy SEAL and the New York Times bestselling author of The Red Circle

Scott McEwen is the #1 New York Times bestselling coauthor of Chris Kyle’s autobiography, American Sniper, which was made into the highest grossing war film of all time, directed by Clint Eastwood and starring Bradley Cooper. He is the coauthor, with Thomas Koloniar, of the national bestselling Sniper Elite series: One-Way Trip, Target America, and The Sniper and the Wolf. A trial attorney in San Diego, California, McEwen works with and provides support for several military charitable organizations, including The Navy SEAL Foundation.

Thomas Koloniar is the author of the post-apocalyptic novel Cannibal Reign. He is the coauthor, with Scott McEwen, of the national bestselling Sniper Elite series: One-Way Trip, Target America, and The Sniper and the Wolf. A former police officer from Akron, Ohio, he lives in Mexico.
or support indie stores by buying on