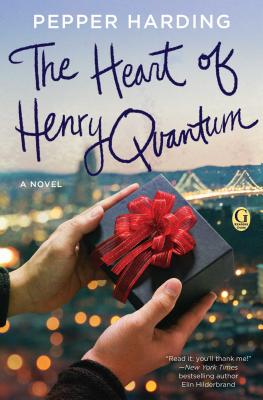 The Heart of Henry Quantum (Paperback)

In the bestselling tradition of A Man Called Ove and the beloved film Love Actually comes a quirky, “winsome tale of an unexpected love triangle late in life” (Publishers Weekly) between a socially awkward man—as he goes on a quest to find his wife a last-minute Christmas gift—and the girl who got away.

Henry Quantum has several thoughts going through his head at any given time, so it’s no surprise when he forgets something very important—specifically, a Christmas gift for his wife, which he realizes two days before Christmas. Henry sets off in search of the perfect present for her: a bottle of Chanel No. 5 perfume. But much like Henry’s ever-wandering mind, his quest takes him in different and unexpected directions, including running into the former love of his life, Daisy. His wife, meanwhile, unhappy in her marriage, is hiding a secret of her own. And Daisy, who has made the unsettling choice of leaving her husband to strike out on her own, finds herself questioning whether she and Henry belong together after all.

An “at times funny, at times profound” (Kirkus Reviews) debut from author Pepper Harding shows how the seemingly insignificant events of one single day can change our lives forever—perhaps, if we’re lucky, for the better.

Pepper Harding is the pen name of a San Francisco writer known for an entirely different kind of literature. Born in far-away New Jersey, educated in Pennsylvania, Tennessee, and finally at the University of Chicago, Pepper is a long time resident of the city, with stints in Marin, Berkeley and, currently, Sonoma County. Pepper has two kids, two cars, one spouse, and, some say, multiple personalities.

Praise For The Heart of Henry Quantum: A Novel…

“[Harding] has skillfully created a set of interesting, well-developed characters whose lives readers can relate to and care about… with quick, witty dialogue and an expertly crafted stream-of-consciousness style, The Heart of Henry Quantum is a highly entertaining read that will remind readers of the power of one day to change a life.”
— Booklist, Starred Review

“Harding’s debut novel is a winsome tale of an unexpected love triangle late in life… As the past is revealed to the reader and Henry must choose his future, the alternating viewpoints add velocity to this fun, fanciful story that will keep readers guessing until the end.”
— Publishers Weekly

"Defying genres...Harding’s debut novel is a fun romp through the streets of the beautiful Golden Gate city... The ending will probably not surprise you, but you will find yourself thoroughly satisfied when you turn the last page."
— Bookreporter

“The delightfully neurotic characters in The Heart of Henry Quantum will captivate you with their hapless love triangle set over the course of one frantic day in San Francisco. Read it: you'll thank me!”