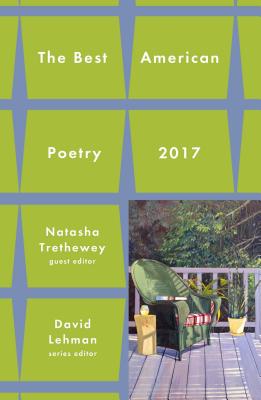 Edited by Pulitzer Prize-winner and nineteenth US Poet Laureate Natasha Trethewey, The Best American Poetry 2017 brings together the most notable poems of the year in the series that offers “a vivid snapshot of what a distinguished poet finds exciting, fresh, and memorable” (Robert Pinsky).

Librarian of Congress James Billington says Natasha Trethewey “consistently and dramatically expanded the power” of the role of US Poet Laureate, holding office hours with the public, traveling the country, and reaching millions through her innovative PBS NewsHour segment “Where Poetry Lives.” Marilyn Nelson says “the wide scope of Trethewey’s interests and her adept handling of form have created an opus of classics both elegant and necessary.” With her selections and introductory essay for The Best American Poetry 2017, Trethewey will be highlighting even more “elegant and necessary” poems and poets, adding to the national conversation of verse and its role in our culture.

The Best American Poetry is not just another anthology; it serves as a guide to who’s who and what’s happening in American poetry and is an eagerly awaited publishing event each year. With Trethewey’s insightful touch and genius for plumbing the depths of history and personal experience to shape striking verse, The Best American Poetry 2017 is another brilliant addition to the series.

Natasha Trethewey is an American poet who was appointed the nineteenth United States Poet Laureate in 2012 and won the 2007 Pulitzer Prize in Poetry for her 2006 collection Native Guard. She is the Poet Laureate of Mississippi and the Robert W. Woodruff Professor of English and Creative Writing at Emory University, where she also directs the Creative Writing Program. She is the author of four collections of poetry: Domestic Work, Bellocq’s Ophelia, Native Guard, and Thrall. She is also the author of a book of creative nonfiction, Beyond Katrina: A Meditation on the Mississippi Gulf Coast.

"The Best American Poetry series has become one of the mainstays of the poetry publication world. For each volume, a guest editor is enlisted to cull the collective output of large and small literary journals published that year to select 75 of the year’s 'best' poems. The guest editor is also asked to write an introduction to the collection, and the anthologies would be indispensable for these essays alone; combined with [David] Lehman’s'state-of-poetry' forewords and the guest editors’ introductions, these anthologies seem to capture the zeitgeist of the current attitudes in American poetry.”
— Academy of American Poets
or
Not Currently Available for Direct Purchase
Copyright © 2020 American Booksellers Association