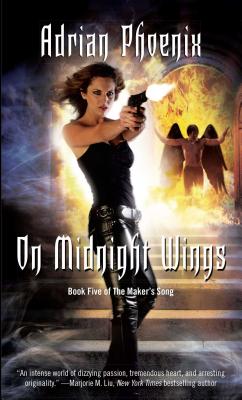 Book Five of the Maker's Song

The fifth thrilling urban fantasy in the "engrossingly fun" (Entertainment Weekly) Maker's Song series following the adventures of FBI agent Heather Wallace and the mysterious, seductive vampire Dante. TORN BETWEEN THREE WORLDS--A DANGER TO THEM ALL. Even as Dante Baptiste's identity as both True Blood and Fallen ripples throughout New Orleans, his powers are expanding in surprising, devastating directions. Kidnapped, drugged, and lost to his brutal past, the vampire wavers between sanity and breakdown at the hands of his torturers. Forsaking the FBI she once loved, Heather Wallace has likewise fallen into malevolent hands. As she struggles to reunite with Dante, men of hate and government evil will try to keep them apart. Even as their teammates frantically search for the pair, dark forces continue to gather against the young vampire--and the fates of mortals, nightkind, and the Fallen rest on him regaining control of his shattered psyche before he becomes the terrible, omnipotent Great Destroyer.

Adrian Phoenix lives in Oregon with three cats and travels to New Orleans whenever possible. This is her seventh novel.
Loading...
or support indie stores by buying on