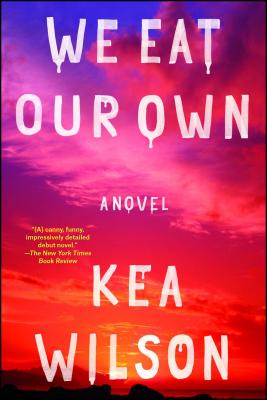 We Eat Our Own

A “canny, funny, impressively detailed debut novel” (The New York Times) that blurs the lines between life and art with the story of a film director’s unthinkable experiment in the Amazon jungle.

When a nameless, struggling actor in 1970s New York gets the call that an enigmatic director wants him for an art film set in the Amazon, he doesn’t hesitate: he flies to South America, no questions asked. He quickly realizes he’s made a mistake. He’s replacing another actor who quit after seeing the script—a script the director now claims doesn’t exist. The movie is over budget. The production team seems headed for a breakdown. The air is so wet that the celluloid film disintegrates.

But what the actor doesn’t realize is that the greatest threat might be the town itself, and the mysterious shadow economy that powers this remote jungle outpost. Entrepreneurial Americans, international drug traffickers, and M-19 guerillas are all fighting for South America’s future—and the groups aren’t as distinct as you might think. The actor thought this would be a role that would change his life. Now he’s worried if he’ll survive it.

This “gripping, ambitious…vivid, scary novel” (Publishers Weekly) is a thrilling journey behind the scenes of a shocking film and a thoughtful commentary on violence and its repercussions.

Praise For We Eat Our Own: A Novel…

“[A] gripping, ambitious debut novel …The drama builds palpably and haphazardly, drawing the invading crew and invaded population together until, in a moment of cathartic bloodshed, reality and fiction collide … the story never flags thanks to the ferocious momentum of [Wilson’s] prose. This is a vivid, scary novel.”
—Publishers Weekly

"This is the smartest kind of horror, one that understands and enjoys the trappings while making us squirmingly aware of the moral contortions required to enjoy them. A highly unusual breath of fetid air."
—Booklist (starred review)

"[A]n exciting debut that reads like a perfectly paced horror novel but offers an unusually close and multilayered examination of violence and art."
—Library Journal

“Joining the ranks of recent hotly anticipated crime novels such as The Girls, Kea Wilson’s We Eat Our Own steps back to the 1970s with a blood-curdling horror story about making a movie in the Amazon.”
—Playboy

"This terrifying yarn never wavers for a moment."
—Providence Journal

"[A]n engrossing, atmospheric and at times morbidly funny story that reads as a horrifying thriller and plays with deeper themes of art and artifice."
—Shelf Awareness

"Wilson's novel is a captivating look at the complicated relationship between human action and identity."
—Webster-Kirkwood Times

Kea Wilson received her MFA from Washington University in St. Louis, where she lives and works. We Eat Our Own is her first novel.
Loading...
or support indie stores by buying on