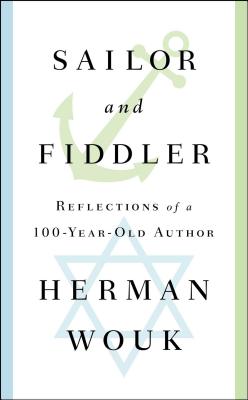 In an unprecedented literary accomplishment, Herman Wouk, one of America’s most beloved and enduring authors, reflects on his life and times from the remarkable vantage point of 100 years old.

Many years ago, the great British philosopher Sir Isaiah Berlin urged Herman Wouk to write his autobiography. Wouk responded, “Why me? I’m nobody.” Berlin answered, “No, no. You’ve traveled. You’ve known many people. You have interesting ideas. It would do a lot of good.”

Now, in the same year he has celebrated his hundredth birthday, Herman Wouk finally reflects on the life experiences that inspired his most beloved novels. Among those experiences are his days writing for comedian Fred Allen’s radio show, one of the most popular shows in the history of the medium; enlisting in the US Navy during World War II; falling in love with Betty Sarah Brown, the woman who would become his wife (and literary agent) for sixty-six years; writing his Pulitzer Prize-winning novel, The Caine Mutiny; as well as a big hit Broadway play The Caine Mutiny Court Martial; and the surprising inspirations and people behind such masterpieces as The Winds of War, War and Remembrance, Marjorie Morningstar, and Youngblood Hawke.

Written with the wisdom of a man who has lived through two centuries and the wit of someone who began his career as professional comedy writer, the first part of Wouk’s memoir (“Sailor”) refers to his Navy experience and writing career, the second (“Fiddler”) to what he’s learned from living a life of faith. Ultimately, Sailor and Fiddler is an unprecedented reflection from a vantage point few people have lived to experience.

“Here’s a pleasure between covers that you wouldn’t expect: a slender, hugely companionable book of tiny autobiographical sketches by one of the inventors of the modern-style middlebrow blockbuster best-seller. Herman Wouk, then, now becomes a trailblazing centenarian charmer along with the author of The Caine Mutiny, The Caine Mutiny Court Martial, Marjorie Morningstar, Youngblood Hawke, The Winds of War and War and Remembrance. And here’s this slender and completely unexpectedly beguiling book of barely 142 pages, all separated into tiny thoughts and vignettes that are peppery and often lovable. Herewith the life of a ‘professional writer,’ who’s now 100. Bless him.”
— Buffalo News