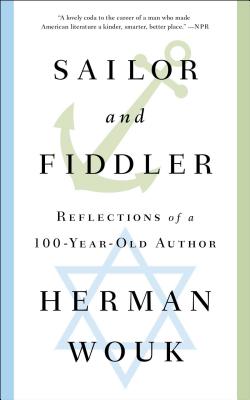 Written with the wisdom of a “trailblazing centenarian charmer” (Buffalo News) and the wit of someone who began his career as professional comedy writer, Sailor and Fiddler is an unprecedented reflection on writing and faith—“a lovely coda to the career of a man who made American literature a kinder, smarter, better place” (NPR).

“Here’s a pleasure between covers that you wouldn’t expect: a slender, hugely companionable book of tiny autobiographical sketches by one of the inventors of the modern-style middlebrow blockbuster best-seller. Herman Wouk, then, now becomes a trailblazing centenarian charmer along with the author of The Caine Mutiny, The Caine Mutiny Court Martial, Marjorie Morningstar, Youngblood Hawke, The Winds of War and War and Remembrance. And here’s this slender and completely unexpectedly beguiling book of barely 142 pages, all separated into tiny thoughts and vignettes that are peppery and often lovable. Herewith the life of a ‘professional writer,’ who’s now 100. Bless him.”
— Buffalo News

Herman Wouk was the author of such classics as The Caine Mutiny (1951), Marjorie Morningstar (1955), Youngblood Hawke (1961), Don’t Stop the Carnival (1965), The Winds of War (1971), War and Remembrance (1978), and Inside, Outside (1985). His later works include The Hope (1993), The Glory (1994), A Hole in Texas (2004) and The Lawgiver (2012). Among Mr. Wouk’s laurels are the 1952 Pulitzer Prize for Fiction for The Caine Mutiny; the cover of Time magazine for Marjorie Morningstar, the bestselling novel of that year; and the cultural phenomenon of The Winds of War and War and Remembrance, which he wrote over a fourteen-year period and which went on to become two of the most popular novels and TV miniseries events of the 1970s and 1980s. In 1998, he received the Guardian of Zion Award for support of Israel. In 2008, Mr. Wouk was honored with the first Library of Congress Lifetime Achievement for the Writing of Fiction. He died in 2019 at the age of 103.
Loading...
or support indie stores by buying on