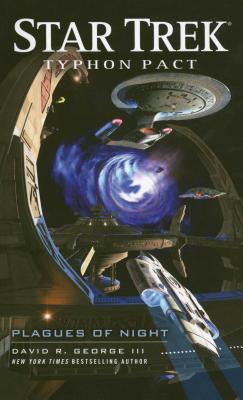 The first novel in a two-part Typhon Pact adventure set in the universe of Star Trek: The Next Generation!

In the wake of the final Borg invasion, which destroyed entire worlds, cost the lives of sixty-three billion people, and struck a crippling blow to Starfleet, six nations adversarial to the United Federation of Planets—the Romulan Star Empire, the Breen Confederacy, the Tholian Assembly, the Gorn Hegemony, the Tzenkethi Coalition, and the Holy Order of the Kinshaya— joined ranks to form the Typhon Pact. For almost three years, the Federation and the Klingon Empire, allied under the Khitomer Accords, have contended with the nascent coalition on a predominantly cold-war footing. But as Starfleet rebuilds itself, factions within the Typhon Pact grow restive, concerned about their own inability to develop a quantum slipstream drive to match that of the Federation. Will leaders such as UFP President Bacco and RSE Praetor Kamemor bring about a lasting peace across the Alpha and Beta Quadrants, or will the cold war between the two alliances deepen, and perhaps even lead to an all-out shooting war?

David R. George III has written more than a dozen Star Trek novels, including Ascendance, The Lost Era: One Constant Star, The Fall: Revelation and Dust, Allegiance in Exile, the Typhon Pact novels Raise the Dawn, Plagues of Night, and Rough Beasts of Empire, as well as the New York Times bestseller The Lost Era: Serpents Among the Ruins. He also cowrote the television story for the first-season Star Trek: Voyager episode “Prime Factors.” Additionally, David has written nearly twenty articles for Star Trek magazine. His work has appeared on both the New York Times and USA TODAY bestseller lists, and his television episode was nominated for a Sci-Fi Universe magazine award. You can chat with David about his writing at Facebook.com/DRGIII.
Loading...
or support indie stores by buying on