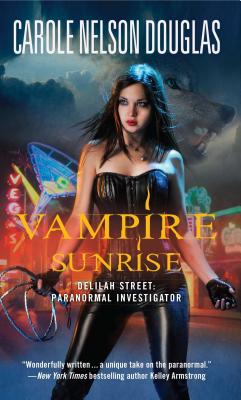 Carole Nelson Douglas, author of more than fifty fantasy and science fiction, mystery, mainstream, and romance novels, was an award-winning reporter and editor for the St. Paul Pioneer Press. After writing some bestselling high fantasy novels and SF thrillers, she imported fantasy notions into her Midnight Louie mystery series, which features a hard-boiled Las Vegas PI who’s a feline “Sam Spade with hairballs.” Her Irene Adler historical series made Carole the first author to use a woman from the Sherlock Holmes stories as a protagonist in the 1991 New York Times Notable Book of the Year, Good Night, Mr. Holmes. She’s won or been short-listed for more than fifty writing awards in nonfiction, sf/fantasy, mystery, and romance genres, including several from the Romance Writers of America and Romantic Times BOOKreviews magazine, and the Cat Writers’ Association. In 2008, RT BOOKreviews magazine named Carole a “pioneer of the publishing industry. Carole and husband Sam Douglas, a former art museum exhibitions director and kaleidoscope designer, are kept as pets by five stray cats and a dog in Fort Worth, Texas. She collects vintage clothing, and does a mean Marilyn Monroe impersonation, and, yes, she does dance, but not with werewolves. As far as she knows.
or
Buy Here
Copyright © 2020 American Booksellers Association