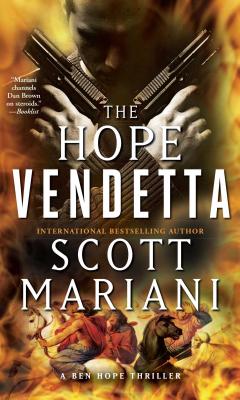 The second book in the electrifying thriller series that “will excite fans of Dan Brown, James Rollins, and Robert Ludlum” (Booklist).

WHAT DOES ZOË BRADBURY KNOW?

At first, only the parents of the lovely archaeologist are concerned. They just want to get in touch with the unpredictable party girl. In fact, Zoë has been kidnapped by a trained team and is being brutally interrogated. The problem: Zoë doesn’t have the answer.

When ex-SAS operative Ben Hope is asked by old friends to find their missing daughter, he tries to stay minimally involved. But when the search erupts into violence, Ben realizes that once again it’s all up to him. While Zoë’s sudden influx of cash right before her disappearance may be related to her recent discovery of an ancient artifact connected to the book of Revelation, the only hard evidence leads from the Greek islands to Savannah, Georgia, then on to Israel and Jerusalem. Gradually, Ben realizes that it’s not just Zoë’s life on the line, but the lives of millions.

However, the shadowy group who are hell-bent on making an end-of-days attack for political gain have made one huge mistake. Because in Ben Hope they are facing the ultimate reckoning. . . .

Scott Mariani grew up in St. Andrews, Scotland. He studied Modern Languages at Oxford and went on to work as a translator, a professional musician, a pistol shooting instructor, and a freelance journalist before becoming a full-time writer. After spending several years in Italy and France, Scott discovered his secluded writer’s haven in the wilds of west Wales, an 1830s country house complete with rambling woodland and a secret passage. When he isn’t writing, Scott enjoys jazz, movies, classic motorcycles, and astronomy.
Loading...
or support indie stores by buying on