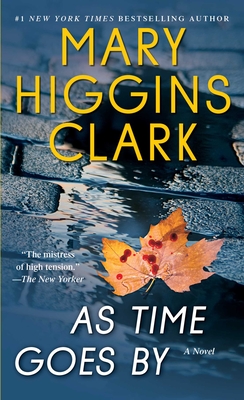 As Time Goes By

As the trial unfolds and the damning evidence against Betsy piles up, Delaney is convinced that Betsy is not guilty and frantically tries to prove her innocence. A true classic from Mary Higgins Clark, As Time Goes By is a thrilling read by “the mistress of high tension” (The New Yorker).

Praise For As Time Goes By: A Novel…

“The mistress of high tension.” (The New Yorker)

Praise for The Melody Lingers On

“Clark,whose novels and short stories have entertained her fans for 40 years, proves again that she's a master of plot twists and sympathetic portrayals of strong damsels in serious distress. The Melody Lingers On is no exception, and the octogenarian Clark continues to shine.” (Richmond Times-Dispatch)

Praise for Death Wears a Beauty Mask and Other Stories

“A gem…a tale with all of Clark’s trademarks: multiple twists, rising tension and a true whodunit. It’s a story to savor, as are the remaining pieces – all previously published – in the collection…There’s something about Mary, and that something is her unfailing ability to grip her legion of readers. And those fans are in for a triple treat as her anniversary year proceeds.” (Richmond Times-Dispatch)

Praise for I've Got You Under My Skin

"Fans of MWA Grand Master Clark will find plenty of intrigue and excitement in this contemporary thriller."(Publishers Weekly)

"Fans of MWA Grand Master Clark will find plenty of intrigue and excitement in this contemporary thriller...Clark keeps readers guessing and in suspense." (Publishers Weekly)

"The snappy pace, layered characters, and many plot surprises will keep readers guessing in this fascinating mystery by two talented writers." (Booklist)

"This serendipitous series launch, or continuation, will satisfy Clark's legion of fans and may well win her some new ones." (Kirkus Reviews)

Praise for Daddy’s Gone A Hunting

“Mary Higgins Clark has penned yet another mystery that will keep her at the top of the suspense writers list for a very long time….Daddy’s Gone A Hunting will chill readers….This one is not to be missed.” (Bookreporter.com)

“Teeming with tantalizing twists, Clark’s crackling tale of identity theft, revenge, and murder is a tempting and thought-provoking thriller.” (Booklist)

“Fans will bite their nails to the quick.” (Kirkus Reviews)

Praise for The Lost Years

“They say that Agatha Christie was the Grand Dame of Mystery. If that’s true, then Mary Higgins Clark must be the Marquise, because this book is a royal treat. . . . The Lost Years is truly a keeper.” (Pittsburgh Tribune-Review)