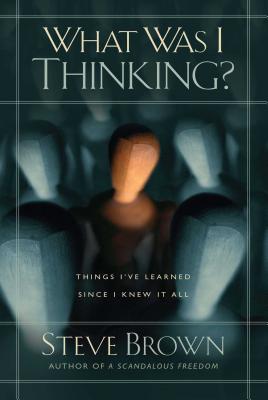 What Was I Thinking?

Things I've Learned Since I Knew It All

Coming to terms that everything isn’t always as it seems, Steve Brown shares the things he has discovered since learning that old ways of thinking aren’t always the only way.

Seminary professor, radio broadcaster, and former pastor Steve Brown is tired. He confesses, "I'm tired of glib answers to hard questions, irrelevant 'God words' and stark, cold foundations on which no house has ever been built."

Setting out to revitalize his faith by reexamining his thoughts and his faith, Steve shares his invigorating discoveries with readers.

A potent tonic for those whose faith feels flat, What Was I Thinking? fully engages the heart, mind, and soul.

Praise For What Was I Thinking?: Things I've Learned Since I Knew It All…

“Steve Brown is a mature Christian who has not stopped growing in his thinking. In this book, he shares insights from life and Scripture, which will greatly benefit any reader.”
— Tony Campolo, PhD, Author, Professor Emeritus at Eastern University, St. Davids, PA

“Steve Brown is a troublemaker who likes to stir things up. He thinks it’s OK for Christians to go to movies and to listen to ‘secular’ music. I don’t know if he dances or not, but if he doesn’t, it’s only because he would look silly dancing. James Bond used to order his drinks “shaken, not stirred.” What Was I thinking ought to leave you stirred but not shaken. And that’s a good thing."
— Bob Lepine, Co-host, FamilyLife Today

Dr. Steve Brown is a broadcaster, seminary professor, author, and founder and president of Key Life Network.  He previously served as a pastor for over twenty-five years and now devotes much of his time to the radio broadcasts, Key Life and Steve Brown Etc. Dr. Brown serves as Professor Emeritus of Preaching at Reformed Theological Seminary teaching at the campuses in Atlanta, Orlando and Washington, D.C. He sits on the board of the National Religious Broadcasters and Harvest USA. Steve is the author of numerous books, and his articles appear in such magazines and journals as Christianity Today, Leadership, Relevant, Leadership, Decision, Plain Truth and Today's Christian Woman. Traveling extensively, he is a much-in-demand speaker. Steve and his wife Anna have two daughters and three granddaughters.
Loading...
or support indie stores by buying on