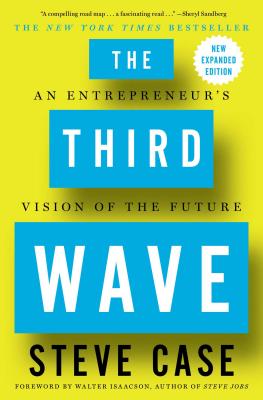 The #1 New York Times and Wall Street Journal bestseller from Steve Case—the co-founder of AOL—presents “a compelling roadmap for the future…that can help us make sense of the technological changes reshaping our economy and the world. A fascinating read” (Sheryl Sandberg, Facebook COO and founder of LeanIn.org).

Steve Case—a pioneer who made the Internet part of everyday life—was on the leading edge of a revolution in 1985 when he co-founded AOL, the first Internet company to go public and the most successful business of the 1990s. Back then Case was an entrepreneur in an industry that hadn’t really been invented yet, but he had a sense how dramatically the Internet would transform business and society. In The Third Wave, he uses his insights garnered from nearly four decades of working as an innovator, investor, and businessman to argue the importance of entrepreneurship and to chart a path for future innovators.

We are entering, as Case explains, the “Third Wave” of the Internet. The first wave saw AOL and other companies lay the foundation for consumers to connect to the Internet. The second wave saw companies like Google and Facebook build on top of the Internet to create search and social networking capabilities, while apps like Snapchat and Instagram leveraged the smartphone revolution. Now, Case argues, we’re entering the Third Wave: a period in which entrepreneurs will vastly transform major “real world” sectors such as health, education, transportation, energy, and food—and in the process change the way we live our daily lives.

Part memoir, part manifesto, and part playbook for the future, The Third Wave explains the ways in which newly emerging technology companies will have to rethink their relationships with customers, with competitors, and with governments; and offers advice for how entrepreneurs can make winning business decisions and strategies—and how all of us can make sense of this ever-changing digital age.

Steve Case is one of America’s most accomplished entrepreneurs—a pioneer who made the Internet part of everyday life and orchestrated the largest merger in the history of business between America Online (AOL) and Time Warner.  Case’s entrepreneurial career began when he cofounded AOL, which became the top performing company of the 1990s. At its peak, nearly half of Internet users in the United States signed on through AOL. As chairman and CEO of Revolution, a Washington, DC based investment firm he cofounded in 2005, Case partners with visionary entrepreneurs to build businesses such as Zipcar, LivingSocial, Sweetgreen, and many others. Case was the founding chair of the Startup America Partnership—an effort launched at the White House to accelerate high-growth entrepreneurship throughout the nation. A member of the Presidential Ambassadors for Global Entrepreneurship, Case also serves as Chairman of the Case Foundation, which he established with his wife Jean in 1997.
Loading...
or
Not Currently Available for Direct Purchase