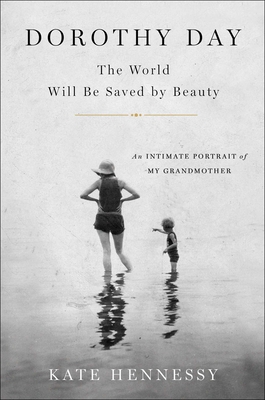 The life and work of Dorothy Day—the iconic, celebrated, and controversial Catholic whom Pope Francis called a “great American”—told with illuminating detail by her granddaughter.

Dorothy Day (1897-1980) was a prominent Catholic, writer, social activist, and co-founder of a movement dedicated to serving the poorest of the poor. Her life has been revealed through her own writings as well as the work of historians, theologians, and academics. What has been missing until now is a more personal account from the point of view of someone who knew her well. Dorothy Day: The World Will Be Saved by Beauty is a frank and reflective, heartfelt and humorous portrayal as written by her granddaughter, Kate Hennessy.

Dorothy Day: The World Will Be Saved by Beauty challenges ideas of plaster saints and of saintly women. Day is an unusual candidate for sainthood. Before her conversion, she lived what she called a “disorderly life,” during which she had an abortion and then gave birth to a child out of wedlock. After her conversion, she was both an obedient servant and a rigorous challenger of the Church. She was a prolific writer whose books are still in print and widely read. While tenderly rendered, this account will show her as driven to do good but dogmatic, loving but judgmental, in particular with regards to her only daughter, Tamar. She was also full of humor and laughter, and could light up any room she entered.

An undisputed radical heroine, called “a saint for the occupy era” by The New Yorker, Day’s story unfolds against a backdrop of New York City from the 1910s to the 1980s and world events spanning from World War I to Vietnam. This thoroughly researched and intimate biography provides a valuable and nuanced portrait of an undersung and provocative American woman.

Praise For Dorothy Day: The World Will Be Saved by Beauty: An Intimate Portrait of My Grandmother…

"[I]ntensely interesting ... the images are kaleidoscopic."
—The Atlantic

"Hennessy’s biography unspools slowly, though not leisurely or even comfortably, as it is genuinely questing after personal and familial enlightenment, and tests of willpower, of facing the human weaknesses, blind errors, and hurtfulnesses of one you love, are the bitter of honesty. Her biography is also embracing – a cinematic documentary – so there is much to admire in this pilgrim’s progress."
—The Christian Science Monitor

"[A] deeply intimate and highly credible account ... Hennessy explores themes of integrity, vocation, and community, portraying Dorothy Day honestly in her gifts and faults. But the most powerful thread is raw beauty that links together the author to her grandmother, strangers to one another, and people to God."
—Sojourners

"Like her grandmother, Hennessy is a writer of great skill, blending interviews, family letters, writings by Dorothy and other members of the Worker, and her own memories into a coherent whole ... Dorothy Day: The World Will Be Saved by Beauty is a work of love, not greed or pride, and that's what gives it much of its beauty."
—Chicago Reader

"This biography vividly conveys the vision and the adventure of this extraordinary woman who deserves to be called a saint."
—Spirituality and Practice

"Extraordinary ... moving and fascinating .. essential for anyone wishing to understand Dorothy Day — a true saint of our time."
—St. Anthony Messenger

"Dorothy Day comes to life, here, but [her daughter] Tamar also lives on the page, engaged with her mother in an absorbing family drama that Hennessy depicts with warmth, poignancy, and not a little poetry."
—Booklist, starred review

"Hennessy has created an amazing tapestry of Day's life and the memories she left with her loved ones."
—Publishers Weekly

“Kate Hennessy’s The World Will Be Saved By Beauty lives in my heart, my mind, and my soul. With a great granddaughters’ great love, compassionate understanding, and often painful truth, Dorothy Day, her family, and the history of the Catholic Worker movement are newly remembered for a new generation by a brilliant writer and family archivist. Frankly, it is a must-read.”
—Martin Sheen, actor and activist

"What a gift! The World Will Be Saved By Beauty is revelatory and compulsively readable. Dorothy Day’s letters and diaries are marvelous, but they raise almost as many questions as they answer, particularly about Day’s relationship with her daughter Tamar. Granddaughter to the one, daughter to the other, Kate Hennessy grew up inside that relationship – breathed it in like air. It nourished and sustained her, and I suspect it still does, but it was immensely complicated, for the two women were in so many ways worlds apart, and Hennessy doesn’t pretend they weren’t. She writes with absolute candor, immense tenderness, and the kind of artistry – much like her grandmother’s – that works small miracles without ever calling attention to itself."
—Carol Flinders, author of Enduring Grace: Living Portraits of Seven Women Mystics

Kate Hennessy's superb new biography of her grandmother, Dorothy Day, is an absolutely fascinating, deeply personal and beautifully written story of one of the most important women—Catholic or otherwise—of our time. Part biography, part detective story, part spiritual memoir, Hennessy brings vividly alive the brilliant, charismatic and faith-filled apostle of social justice who will one day be known as St. Dorothy Day."
—James Martin, SJ, author of Jesus: A Pilgrimage and My Life with the Saints.

“Many years from now, when, presumably, Dorothy Day has been added to the canon of saints, readers will look to Kate Hennessy’s stunning work to be reminded that holy people are actual human beings. Through Day’s relationship with her daughter Tamar, she emerges in her full complex humanity, struggling like any parent, astonishingly insightful one moment, oblivious the next. Ultimately, Kate Hennessy’s book tells the universal story of how hard it is fully to know the people we love the most, of the struggle to find forgiveness and healing, of the many forms of conversion, and of the many aspects of that beauty—as Dostoevsky wrote—that will save the world.”
—Robert Ellsberg, editor of The Duty of Delight: The Diaries of Dorothy Day

Kate Hennessy is a writer and the youngest of Dorothy Day’s nine grandchildren. Her work has been included in Best American Travel Writing. She is the author of Dorothy Day: The World Will Be Saved By Beauty and, in collaboration with the photographer Vivian Cherry, Dorothy Day and the Catholic Worker: The Miracle of our Continuance. Kate divides her time between Ireland and Vermont.
Loading...
or
Not Currently Available for Direct Purchase