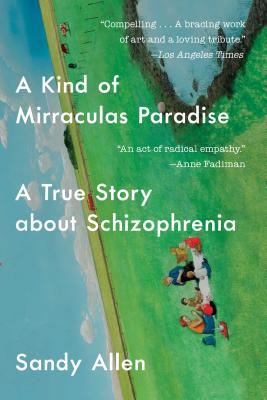 A Kind of Mirraculas Paradise

“Thrilling…Gorgeous…a watershed in empathetic adaptation of ‘outsider’ autobiography” (The New Republic), A Kind of Mirraculas Paradise is a dazzlingly, daringly written book that’s poised to change conversations about schizophrenia and mental illness overall.

"Compelling... A bracing work of art and a loving tribute to a man whose voice, no matter how unpolished, deserves to be heard."
— LA Times

"A breakthrough in meta-biographical writing... [Allen] marries several distinct genres to produce an insight into what it means to be a person with a psychiatric diagnosis...Thrilling... Gorgeous... a watershed in empathetic adaptation of 'outsider' autobiography."
— The New Republic

"Enthralling... Being inside [Bob's] head, seeing how life felt and looked to him, is a miraculous thing indeed."
— Minneapolis Star Tribune

"Sandra Allen has crafted a fearless narrative about what it is really like to grow up under the weight of mental illness . . . Honest, heartbreaking, and often humorous, this remarkable book offers a window into an experience of mental illness that many people often never get the chance to see through."
— Bustle

"Intriguing... mesmerizing... what a journey it is."
— The Rumpus

"Insightful... Allen offers readers an incredible glimpse into the life of a person battling with schizophrenia."
— Publishers Weekly

"Righteous, empathetic... [Paranoia] is seldom experienced or portrayed so elegantly as Allen does here."
— Paste Magazine

"Compelling... skillful... vivid... a page-turning biography and family history... a deeply personal story about an enigmatic person living the only way he knows how: by trial and error."
— Library Journal, starred review

Sandy Allen is a writer, speaker, editor and teacher. Their essays and features stories have been published by BuzzFeed News, CNN Opinion, Bon Appétit's Healthyish, and Pop-Up Magazine. Sandy was previously BuzzFeed News's deputy features editor. They also founded and ran the online-only literary quarterly Wag's Revue. Sandy's work focuses on constructs of normalcy, including psychiatric disability and gender. Sandy is non-binary trans. Originally from Muir Beach, CA, they live in the Catskills. A Kind of Mirraculas Paradise is their first book. For more, visit HelloSandyAllen.com
Loading...
or support indie stores by buying on