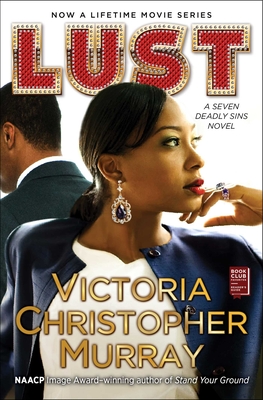 From the NAACP Image award winner and national bestselling author Victoria Christopher Murray, a novel inspired by the seven deadly sins about a woman caught between an entertainment mogul with a shady past and his childhood friend who is out for revenge.

Is lust a sin?

Tiffanie has lived a sheltered life in a very strict household with her pastor grandfather and her grandmother in Washington, D.C. But when she meets Damon, she falls for the successful entertainment businessman despite his history as a drug dealer. Everyone sees a bright future for the couple—yet when Tiffanie meets Trey, her lustful feelings leave her confused just days before her wedding.

Trey is Damon’s childhood best friend with whom he built a successful drug business. But when the game got hot and Damon decided to leave, Trey stayed and continued to sell drugs until he was arrested and spent seven years in prison. Now he’s out and able to attend the wedding. While Damon is thrilled to have Trey back and hopes to bring his best friend into his business, Trey has other plans.

And in the end, there will only be one man standing...

Includes a reading group guide with an author Q&A and discussion questions for book clubs.

Victoria Christopher Murray is the author of more than twenty novels including: Greed; Envy; Lust; The Ex Files; Lady Jasmine; The Deal, the Dance, and the Devil; and Stand Your Ground, which was named a Library Journal Best Book of the Year. Winner of nine African American Literary Awards for Fiction and Author of the Year (Female), Murray is also a four-time NAACP Image Award Nominee for Outstanding Fiction. She splits her time between Los Angeles and Washington, DC. Visit her website at VictoriaChristopherMurray.com.

"Murray has penned hot, steamy scenes in which her protagonist’s imagination runs wild, followed by the consequences of her realizing her dangerous dreams. A jarring twist at the end has the reader wondering who the good guys really are." —Booklist (starred review)

"Murray mixes quite a bit of passion, a touch of treachery, and some good old-fashioned revenge."
— Library Journal

"A topsy-turvy tale of passion on steroids."
— Essence Magazine

"Stand Your Ground by Victoria Christopher Murray is a fact-to-fiction examination of the human condition. Using a vivid, realistic premise, she takes a 360-degree view to bring all sides to the forefront for us to enjoy, learn from, judge and celebrate. . . . The characters draw us in for debate and conversation long after the final sentence. Stand Your Ground has great literary relevance for our time."
— USA Today

"Murray has written a tension-packed novel around the hot-buzz national topic of an unarmed black youth shot by a white male, an act then subjected to the Stand Your Ground rule as a legal defense tactic. . . . Murray’s writing admirably shows the often overlooked human emotions following racial violence. . . . The pulled-from-the headlines storyline will captivate readers."
— Library Journal (starred review)

“With artful descriptions, Victoria put me inside their hearts and minds. I did not just enjoy this read, I lived it."
— Michelle Lindo Rice, author of the Able To Love series

"Murray spices up her story line with plenty of juicy scandals. . . . Readers seeking an emotional tale with broad themes of trust, betrayal, and forgiveness will do well by choosing Murray's latest effort."
— Library Journal

“This faith-based novel should keep devout fans on their toes.”
— Upscale magazine

“A great choice for folks who spend Sunday mornings in the front pew.”
— Library Journal

“Frenetic and deliciously slapstick sequel to Sinners & Saints . . . These frenemies [Rachel Jackson Adams and Jasmine Larson Bush] are drama queens at their best and smartest, a combination that will leave fans praying for their further misadventures.”
— Publishers Weekly

“Murray creates a believable scenario of two people who never wanted to hurt their friends…. With extremely well-drawn characters, the story offers neither blame nor excuses, keenly depicting the heartbreaks caused by both death and betrayal.”
— Publishers Weekly

“Readers, be on the lookout for Victoria Christopher Murray’s Never Say Never. You’ll definitely need to have a buddy-reader in place for the lengthy discussion that is bound to occur."
— USA Today

“Never Say Never is a testament to the magnificence of Murray’s storytelling gift! The author creates a surprisingly satisfying ending for each of the characters, even when their ‘sin’ seems unforgivable.”
— RT Book Reviews

“The Ex Files is a moving-on song in four-part harmony.”
— Donna Grant and Virginia DeBerry, authors of Tryin’ to Sleep in the Bed You Made

“Once again, Victoria Christopher Murray has crafted a compelling, intriguing, and page-turning story that stays with you long after you’ve finished the book. This wonderful tale of four different women from vastly different backgrounds shows how we can all be bound by the common thread of faith.”
— ReShonda Tate Billingsley, author of Everybody Say Amen and I Know I’ve Been Changed

“My girl, Victoria Christopher Murray has done it again! I love her work and this book will bless you, so read it.”
— Michele Andrea Bowen, author of Church Folk, Second Sunday, and Holy Ghost Corner

THE DEAL, THE DANCE, AND THE DEVIL

“I think I've found a new author to add to my list of favorites. . . . Murray knows how to tell a story.I can't wait to read other books by this author.”
— Debbie Norrell, New Pittsburgh Courier

“Murray’s characters are extremely likable. . . .This page-turning take on the Faustian theme should satisfy fans and newcomers alike.”
— WalMart BookPage

SINS OF THE MOTHER

"Victoria is an exceptional writer who knows how to deliver a story."
— Kimberla Lawson Roby, author of Changing Faces

"Murray has always impressed me with her ability to live the life of her characters and make them come alive with each turning page."
— Indianapolis Recorder

TOO LITTLE, TOO LATE

“Juicy Jasmine Larson Bush returns. . . . Murray efficiently illustrates the importance of honesty and trust in marriage, and manages to contain Jasmine’s outrageousness within the context of Christian faith."
— Publishers Weekly

A SIN AND A SHAME

“One of our best and most prolific writers, an excellent storyteller.”
— Eric Jerome Dickey

“Intriguing and well-written…. If you loved and hated Jasmine in Temptation, you’ll love and hate her again.”
— Indianapolis Record

“I enjoyed reading this book. It took me back to when I was living on the DL and made me realize just how hard sisters love their men, even when they know the truth.”
— J. L. King, author of On The Down Low

“Grown Folks Business rattles the relationship cage and gets to the heart of what’s serious and painfully real."
— Lolita Files, author of Tastes Like Chicken

“Victoria is an exceptional writer who knows how to deliver a story. Readers will find themselves still thinking about the characters long after they’ve turned the last page.”
— Kimberla Lawson Roby, author of The Best-Kept Secret

"An emotional, realistic look at the devastation temptation can wreak."
— Library Journal

“Victoria Christopher Murray is back! Once again she’s given us a fast paced novel about people of faith who must face real-life challenges.”
— E. Lynn Harris

“With memorable characters, Truth Be Told is an entertaining, suspenseful, and page-turning read. I loved it!”
— Kimberla Lawson Roby, author of Too Much of a Good Thing

"Truth Be Told is a truly enjoyable story. The unforgettable characters lend an air of reality to this emotional and engaging read. [Murray’s] latest is sure to please fans and resonate long after the last page is turned.”
— Jacquelin Thomas, author of Soul Journey
or support indie stores by buying on
Copyright © 2020 American Booksellers Association