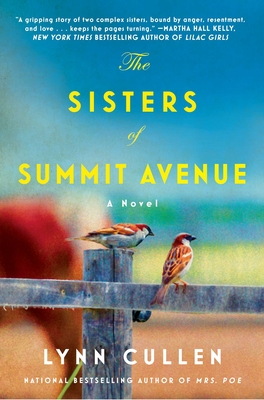 From Lynn Cullen, the bestselling author of Mrs. Poe and Twain’s End, comes a powerful novel set in the Midwest during the Great Depression, about two sisters bound together by love, duty, and pain.

Ruth has been single-handedly raising four young daughters and running her family’s Indiana farm for eight long years, ever since her husband, John, fell into a comatose state, infected by the infamous “sleeping sickness” devastating families across the country. If only she could trade places with her older sister, June, who is the envy of everyone she meets: blonde and beautiful, married to a wealthy doctor, living in a mansion in St. Paul. And June has a coveted job, too, as one of “the Bettys,” the perky recipe developers who populate General Mills’ famous Betty Crocker test kitchens. But these gilded trappings hide sorrows: she has borne no children. And the man she used to love more than anything belongs to Ruth.

An emotional journey of redemption, inner strength, and the ties that bind families together, for better or worse, The Sisters of Summit Avenue is a heartfelt love letter to mothers, daughters, and sisters everywhere.

Praise For The Sisters of Summit Avenue…

"A captivating depression-era tale of two sisters locked into a lifelong rivalry that will equal parts surprise and delight you. This is the sibling story I never knew I needed."
— Sara Gruen, New York Times bestselling author of WATER FOR ELEPHANTS and AT THE WATER'S EDGE

“A story of gripping emotional power. Riveting and suspenseful, the novel builds to a devastating conclusion that made me return to the beginning to start over, because I wasn't ready to leave Cullen's vivid fictional world.”
— Lauren Belfer, New York Times bestselling author of AND AFTER THE FIRE and CITY OF LIGHT.

“In THE SISTERS OF SUMMIT AVENUE, Lynn Cullen has given us a truly lovely gift; a fascinating, complex study of the ties that bind mothers, sisters and daughters.  The Depression-era setting is vividly captured; the behind-the-scenes glimpses into the world of advertising, in the form of Betty Crocker, fascinating.  But it’s the poignant, beautifully rendered story of two sisters who find the courage to reclaim their bond after years of misunderstandings and heartbreak that you will remember, and cherish.”
— Melanie Benjamin, New York Times bestselling author of THE SWANS OF FIFTH AVENUE

In The Sisters of Summit Avenue , Lynn Cullen brings to life the real women behind Betty Crocker, the fictional domestic goddess who gave advice and hope to countless housewives who were just scraping by during the Great Depression. Cullen’s female characters shine in their complexity and true-life emotions. An enchanting and engaging read.
— Elizabeth Letts, #1 New York Times bestselling author of FINDING DOROTHY

“In this evocative Depression-era novel . . . Cullen explores a complex, realistic dynamic between sisters who have never resolved their contentious youthful traumas and grounds her story with convincing historical details. Fans of Paula McLain will love this.”
— Publishers Weekly

“Two sisters struggle with envy, resentment, and love in this masterful, Depression-era tale…Enough surprises await to entertain even the most jaded of plot-guessers. For fans of Laura Moriarty’s The Chaperone (2012) and Ann Hood’s The Obituary Writer (2013).”
— Booklist, starred review

"Rivalry among sisters is a well-used novel trope, but Atlanta author Lynn Cullen gives it a fresh perspective in her depression-era novel, The Sisters of Summit Avenue . . . pair[ing] fascinating historical detail with an emotionally moving and original tale."
— Augusta Chronicle

"Cullen’s (Mrs. Poe) complex story of a family torn apart by jealousy, betrayal, and misunderstanding will resonate with all readers. Courageous and heart-wrenching, it is a tribute to mothers, daughters, and sisters that’s not to be missed."
— Library Journal

"Cullen’s storytelling skills sweep the plot along . . . Rooted in age-old sibling rivalries, The Sisters of Summit Avenue asks if it’s possible to overcome the insecurities and biases of childhood, and offers hope for the likelihood of growth and healing in adulthood."
— Atlanta Journal Constitution

"Historical fiction fans will revel in the Depression-era storyline, which draws upon that time period’s fascination with radio personalities, including Betty Crocker. . . . a solid addition to the historical fiction genre and a highly enjoyable read."
— BookReporter