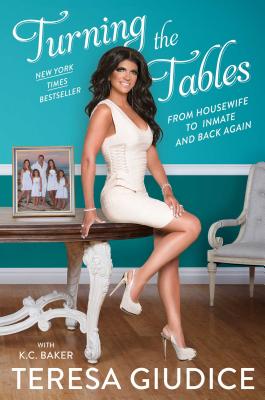 From Housewife to Inmate and Back Again

The star of The Real Housewives of New Jersey and three-time New York Times bestselling author offers a behind-the-scenes look at life in prison, her marriage, her rise to fame, the importance of her family, and the reality TV franchise that made her a household name in her explosive and ultimately uplifting first-ever memoir.

“People think they know everything about me…but they don’t. Not even close.”

Teresa Giudice, star of The Real Housewives of New Jersey, has seen it all, but nothing—not even Real Housewives scandals—could compare to the media firestorm that ensued after she was convicted on federal fraud charges.

The infamous, fun-loving Jersey mom of four was sentenced to fifteen months in the same prison where Piper Kerman—the real-life inspiration behind Orange Is the New Black—did her time. Her tiny prison cubicle in Connecticut felt so far removed from the glamorous world portrayed on The Real Housewives of New Jersey. What was a skinny Italian to do? Keep a diary, of course…

In her very first tell-all memoir, Teresa comes clean on all things Giudice: growing up as an Italian-American, meeting the love of her life and starting a family, dealing with chaos and catfights on national television, and eventually, coming to terms with the reality of life in prison. Featuring never-before-seen scans of her prison diary, Turning the Tables captures some of the most memorable moments of her prison stay, including the cringe-inducing fights she witnessed, the awkward conundrum of being trapped when a fellow inmate had a…guest…over, and the strength she found while confined between four concrete walls.

Even at her lowest of lows, Teresa was able to live la bella vita by staying positive and realizing her purpose. Friends, foes, and fans have speculated about Teresa’s prison experience, but nothing will prepare you for the revelations she makes in this entertaining and heartwarming memoir.

“The world will see a new Teresa. A different Teresa. Well, actually, the Teresa I always was.”

Teresa Giudice stars on The Real Housewives of New Jersey and is the New York Times bestselling author of Turning the Tables; Skinny Italian; Fabulicious!; Fabulicious: Fast and Fit; and Fabulicious! On the Grill. A Berkeley College graduate and a longtime supporter of NephCure Kidney International, she lives in New Jersey with her family.

K.C. Baker is a staff writer at People magazine, where she has worked for the past fifteen years. Before that she was a staff writer at the New York Daily News. Turning the Tables is K.C.’s third book.
Loading...
or
Not Currently Available for Direct Purchase