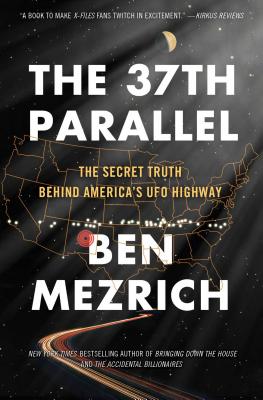 A real-life mix of The X-Files and Close Encounters of the Third Kind, Mezrich “writes vividly and grippingly…A terrific story…[that] will make a heck of a movie” (The Washington Post). Here is the “fascinating” (Publishers Weekly) true story of a computer programmer who tracks paranormal events in remote areas of the western United States and is drawn deeper and deeper into a mysterious conspiracy.

Like Agent Mulder of The X-Files, microchip engineer and sheriff’s deputy Chuck Zukowski is obsessed with tracking down UFO reports in Colorado. He even takes the family with him on weekend trips to look for evidence of aliens. But this innocent hobby takes on a sinister urgency when Zukowski learns of mutilated livestock—whose exsanguination is inexplicable by any known human or animal means.

Along an expanse of land stretching across the southern borders of Utah, Colorado, and Kansas, Zukowski documents hundreds of bizarre incidences of mutilations, and discovers that they stretch through the heart of America. His pursuit of the truth draws him deeper into a vast conspiracy, and he journeys from Roswell and Area 51 to the Pentagon and beyond; from underground secret military caverns to Native American sacred sites; and to wilderness areas where strange, unexplained lights traverse the sky at extraordinary speeds. Inspiring and terrifying, Mezrich’s “dramatic narrative…connects dots we didn’t even know existed…Something’s clearly happening out there in the high meadows and along desert highways” (Kirkus Reviews). The 37th Parallel will make you, too, wonder if we are really alone.

Praise For The 37th Parallel: The Secret Truth Behind America's UFO Highway…

“A book to make X-Files fans twitch in excitement, Mezrich connects dots we didn’t even know existed.… A nicely dramatic narrative... Something’s clearly happening out there in the high meadows and along desert highways... Fans of Art Bell and company will find all the affirmation they need.”

"Fascinating... Chuck Zukowski takes up UFO investigations as a hobby, but it slowly turns into something more. ... Mezrich approaches the material seriously, preserving the human element but taking care to present the facts. Zukowski’s realization that many sightings and events line up along the 37th parallel is the culmination of years of investigations, and after thrilling stories of lights in the sky, screams in the night, and mysterious dark helicopters, readers will be more than ready for the exciting revelation."
— Publishers Weekly

“Mezrich writes vividly and grippingly… It all makes a terrific story.”
— Washington Post

"[E]xtremely engaging … the inclusion of photos and important documents really helps the reader understand the intricacies of the investigation."
— Press Association (UK)