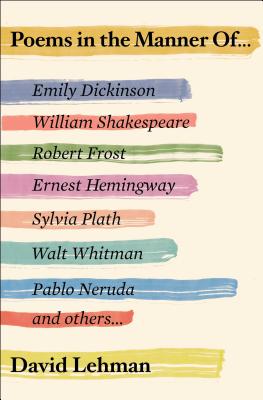 Poems in the Manner Of

Poems in the Manner Of is an illuminating journey through centuries of writers who continue to influence new work today, including that of respected poet and series editor of The Best American Poetry David Lehman.

Lehman has been writing “poems in the manner of” for years, in homage to the poems and people that have left an impression, experimenting with styles and voices that have lingered in his mind. Finally, he has gathered these pieces, creating a striking book of poems that channels poets from Walt Whitman to Sylvia Plath and also calls upon jazz standards, Freudian questionnaires, and astrological profiles for inspiration.

Intelligent and sparkling, this is a great gift for poetry fans and a useful resource for creative writers. These are poems of wit and humor but also deep emotion and clear intelligence, informed by Lehman’s genuine and knowledgeable love of poetry and literature. From Catullus and Lady Murasaki to Wordsworth, Neruda, Virginia Woolf, W.H. Auden, and Charles Bukowski, Poems in the Manner Of shows how much life there is in poets of the past. And like Edward Hirsch’s How to Read a Poem and Robert Pinsky’s Singing School, this book gives you more than poetry. Whether you’re reading for pure enjoyment or examining how a poet can use references and influences in their own work, Poems in the Manner Of is a treasure trove of literary pleasures and food for thought.

Praise For Poems in the Manner Of…

Praise for New and Selected Poems

“David Lehman is a true literary man…Poems such as “Mother Died Today” mark the development of his style from a more accessible, straightforward poetry with narrative and storytelling, to a more experiment, mashy style of contemporary poetry, often engaging in dialogue with other works of art.”
— The Literary Man

“[New and Selected Poems] places the poems themselves as center stage: they steer an entertaining, zigzag path between nonchalant Jewish-American autobiography and whimsical experiment. Lehman shows a genius for comic one-liners, for the humor at the root of pathos and the pathos inside tragedy.”
— Publishers Weekly (starred review)

David Lehman, the series editor of The Best American Poetry, is also the editor of The Oxford Book of American Poetry. His eleven books of poetry include Playlist, Poems in the Manner Of, New and Selected Poems, When a Woman Loves a Man, and  The Daily Mirror. The most recent of his many nonfiction books is One Hundred Autobiographies  A Memoir. He lives in New York City and Ithaca, New York.
Loading...
or
Not Currently Available for Direct Purchase