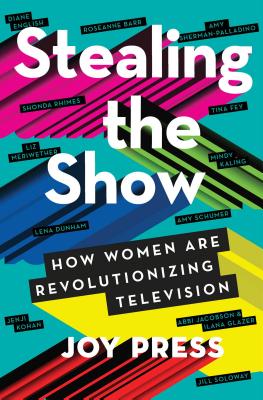 From a leading cultural journalist, a definitive look at the rise of the female showrunner—and a new golden era of television.

But things weren't always this rosy. It took decades of determination in the face of preconceived ideas and outright prejudice to reach this new era. In this endlessly informative and wildly entertaining book, veteran journalist Joy Press tells the story of the maverick women who broke through the barricades, starting with Roseanne Barr (Roseanne) and Diane English (Murphy Brown), whose iconic shows redefined America’s idea of “family values” and incited controversy that reached as far as the White House.

Barr and English inspired the next generation of female TV writers and producers to carve out the creative space and executive power needed to present radically new representations of women on the small screen. Showrunners like Amy Sherman Palladino (Gilmore Girls), Jenji Kohan (Weeds, Orange Is the New Black), and Jill Soloway (Transparent) created characters and storylines that changed how women are seen and how they see themselves, in the process transforming the culture.

Stealing the Show is the perfect companion to such bestsellers as Mindy Kaling’s Is Everyone Hanging Out Without Me?, Tina Fey’s Bossypants, and Shonda Rhimes’ Year of Yes¸ not to mention Sheila Weller’s Girls Like Us and Rebecca Traister’s All the Single Ladies. Drawing on deep research and interviews with the key players, this is the exhilarating behind-the-scenes story of a truly groundbreaking revolution in television.

"In this thrilling book, Joy Press weaves the most influential TV shows created by women into a cohesive narrative arc. You'll learn how Murphy Brown and Roseanne paved the way for revolutionary shows like Transparent and Orange is the New Black — and how these shows actually influenced the culture around them. Press also conjures up figures, and the writing room environments, behind the creation of these shows. Through her sharp descriptions, the showrunners become characters as interesting as the protagonists they created for seasons."— Refinery 29

Joy Press is the TV correspondent for Vanity Fair. She was previously the chief television critic at The Village Voice, an entertainment editor and writer for Salon and the Los Angeles Times, and a contributor to publications such as New York, The Guardian, and The New York Times. She lives in Los Angeles.
Loading...
or
Not Currently Available for Direct Purchase