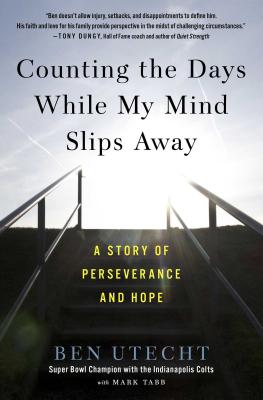 Counting the Days While My Mind Slips Away

A Story of Perseverance and Hope

After five major concussions, NFL tight-end Ben Utecht of the Indianapolis Colts and Cincinnati Bengals is losing his memories. This is his powerful and emotional love letter to his wife and daughters—whom he someday may not recognize—and an inspiring message for all to live every moment fully.

Ben Utecht has accumulated a vast treasure of memories: tossing a football in the yard with his father, meeting his wife, with whom he’d build a loving partnership and bring four beautiful daughters into the world, writing and performing music, catching touchdown passes from quarterback Peyton Manning, and playing a Super Bowl Championship watched by ninety-three million people.

But the game he has built his living on, the game he fell in love with as a child, is taking its toll in a devastating way. After at least five major concussions—and an untold number of micro-concussions—Ben suffered multiple mild traumatic brain injuries that have erased important memories. Knowing that his wife and daughters could someday be beyond his reach and desperate for them to understand how much he loves them, he recorded his memories for them to hold on to after his essential self is gone.

Counting the Days While My Mind Slips Away chronicles his remarkable journey from his early days throwing a football back and forth with his father to speaking about the long-term effects of concussions before Congress, and how his faith keeps him strong and grounded as he looks toward an uncertain future. Ben recounts the experiences that have shaped his life and imparts the lessons he’s learned along the way. Emotionally powerful, inspiring, and uplifting, Ben’s story will captivate and encourage you to make the most of every day and treasure all of your memories.

Ben Utecht is a previous tight end for the Indianapolis Colts and Cincinnati Bengals. As a national speaker, author, and advocate for brain health, Utecht has worked diligently to spread education and awareness regarding concussions, and recently accepted the Ambassador Award presented by the Minnesota Brain Injury Alliance. He was the national spokesperson on concussion for the American Academy of Neurology and sits on the board for the American Brain Foundation. The AAN awarded him the 2014 Public Leadership In Neurology Award, which is their most prestigious award.

Mark Tabb has authored and co-authored over twenty books, including Living with Less, the Upside of Downsizing Your Life (B&H), and the 2004 Gold Medallion finalist, Out of the Whirlwind (B&H). He also collaborated with Stephen Baldwin on the New York Times bestseller, The Unusual Suspect (FaithWords). Mark is currently working with Alec Baldwin on his book, A Promise to Ourselves (St. Martin’s Press).
or support indie stores by buying on