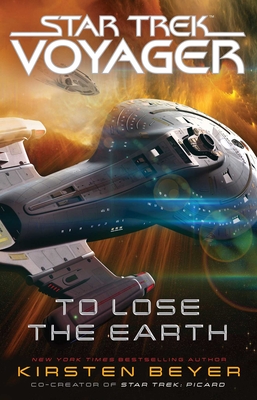 The long-awaited follow-up to Voyager: Architects of Infinity from the New York Times bestselling author and cocreator of Star Trek: Picard!

As the crew of the Full Circle fleet works to determine the fate of their lost ship, the Galen, a struggle for survival begins at the far edge of the galaxy. New revelations about Species 001, the race that built the biodomes that first drew the fleet to investigate planet DK-1116, force Admiral Kathryn Janeway to risk everything to learn the truth.

Kirsten Beyer is the New York Times bestselling author of ten Star Trek: Voyager novels, including String Theory: Fusion, Full Circle, Unworthy, Children of the Storm, The Eternal Tide, Protectors, Acts of Contrition, Atonement, A Pocket Full of Lies, and Architects of Infinity. She wrote the Buffy the Vampire Slayer novel, One Thing or Your Mother, and the Alias novel Once Lost. In 2016, she joined the writing staff of the CBS All Access series Star Trek: Discovery. In 2017, she pitched the premise for a new series centered around one of Star Trek’s most beloved captains, Jean-Luc Picard, and became one of show’s cocreators. In addition to her writing and producing responsibilities, Kirsten also serves as the resident Star Trek canon resource for the writer’s rooms and production departments, as well as the liaison between the series and the tie-in licensors. Kirsten received undergraduate degrees in English Literature and Theater Arts from Loyola Marymount University and an MFA degree from UCLA. She lives in Los Angeles with her husband, actor and composer David Permenter, and their daughter.
or support indie stores by buying on
Copyright © 2020 American Booksellers Association