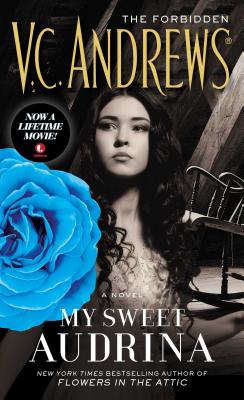 My Sweet Audrina (The Audrina Series #1)

V.C. Andrews has enthralled millions with her suspenseful, gothic family sagas, including the bestselling Dollanganger series that began with Flowers in the Attic. Now, one of her strangest, most beloved classics My Sweet Audrina—a haunting story of love and deceit, innocence and betrayal, and the suffocating power of parental love—is soon to be a major Lifetime movie event.

The idea of her sister hovered above them all.

Audrina fiercely desired to be as good as her sister. She knew her father could not love her as he loved that other girl, for her sister was so special, so perfect—and dead.

Upstairs in a locked room awaited her sister’s clothes and dolls, her animals and games—and her sacred rocking chair. Now Audrina will rock and rock and rock to reclaim all of her gone sister’s special gifts.

And then finally she’ll learn the secrets everyone else knows but her.

One of the most popular authors of all time, V.C. Andrews has been a bestselling phenomenon since the publication of Flowers in the Attic, first in the renowned Dollanganger family series, which includes Petals on the Wind, If There Be Thorns, Seeds of Yesterday, and Garden of Shadows. The family saga continues with Christopher’s Diary: Secrets of Foxworth, Christopher’s Diary: Echoes of Dollanganger, and Secret Brother, as well as Beneath the Attic, Out of the Attic, and Shadows of Foxworth as part of the fortieth anniversary celebration. There are more than eighty V.C. Andrews novels, which have sold over 107 million copies worldwide and have been translated into twenty-five foreign languages. Join the conversation about the world of V.C. Andrews at Facebook.com/OfficialVCAndrews.
or support indie stores by buying on