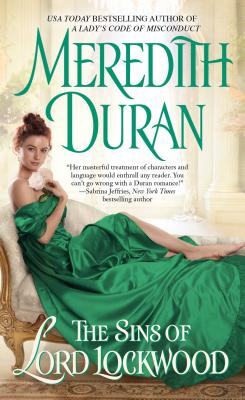 The Sins of Lord Lockwood (Rules for the Reckless #6)

BACK FROM THE DEAD, AN EARL SEEKS VENGEANCE...

Liam Devaliant, Lord Lockwood, was born into a charmed life. Charismatic, powerful, and wild, he had the world at his feet—and one woman as his aim. His wedding to Anna was meant to be his greatest triumph. Instead, in a single moment, a wicked conspiracy robbed him of his future and freedom.

...BUT WILL HIS LONG-LOST COUNTESS PAY THE PRICE?

Four years later, Liam has returned from death with plans for revenge. Standing in his way, though, is his long-absent bride. Once, he adored Anna's courage. Now it seems like a curse, for Anna refuses to fear or forget him. If she can't win back Liam's love, then she means at least to save his soul...no matter the cost.

"Duran has created unforgettable characters whose struggles with injustice and emotional and physical pain only bring them closer together. The novel, rich with powerful prose, is an exemplar of second-chance love stories."
— Publishers Weekly, starred review

"Duran does a fabulous job...THE SINS OF LORD LOCKWOOD is an intricate story of redemption overcoming the stains of fear and despair, and of love proving that two people together are stronger than two apart."
— Fresh Fiction

Meredith Duran is the USA TODAY bestselling author of thirteen novels. She blames Anne Boleyn for sparking her lifelong obsession with British history (and for convincing her that princely love is no prize if it doesn’t come with a happily-ever-after). She enjoys collecting old etiquette manuals, guidebooks to nineteenth-century London, and travelogues by intrepid Victorian women.
or support indie stores by buying on