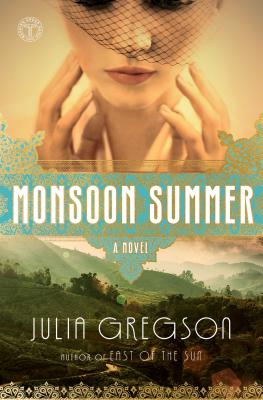 By the award-winning author of East of the Sun, “a powerful and memorable novel” (Publishers Weekly) about the forbidden love between a young Indian doctor and an English midwife.

Oxfordshire, 1947. Kit Smallwood, hiding a painful secret and exhausted from nursing soldiers during the Second World War, escapes to Wickam Farm where her friend is setting up a charity sending midwives to the Moonstone Home in South India.

Then Kit meets Anto, an Indian doctor finishing his medical training at Oxford. But Kit’s light-skinned mother is in fact Anglo-Indian with secrets of her own, and Anto is everything she does not want for her daughter.

Despite the threat of estrangement, Kit is excited for the future, hungry for adventure, and deeply in love. She and Anto secretly marry and set off for South India—where Kit plans to run the maternity hospital she’s helped from afar.

But Kit’s life in India does not turn out as she imagined. Anto’s large, traditional family wanted him to marry an Indian bride and find it hard to accept Kit. As their relationship begins to fray, Kit’s job becomes fraught with tension as they both face a newly independent India, where riots have left millions dead and there is deep-rooted suspicion of the English. In a rapidly changing world, Kit’s naiveté is to land her in a frightening and dangerous situation...

Based on true accounts of European midwives in India, Monsoon Summer is a powerful story of secrets, the nature of home, the comforts and frustrations of family, and how far we’ll go to be with those we love.

Julia Gregson has worked as a journalist and foreign correspondent in the UK, Australia, and the US. She is the author of East of the Sun, which was a major bestseller in the UK and won the Romantic Novel of the Year Prize and the Le Prince Maurice Prize there, and Monsoon Summer. Her short stories have been published in collections and magazines and read on the radio. She lives in Monmouthshire, Wales.

Praise For Monsoon Summer: A Novel…

“Dazzling . . . Gregson, as always, writes with grace and authority in this fresh and affecting tale that successfully blends questions of love, home, colonialism and race with suspense and secrets. Like E.M. Forster's A Passage to India and Paul Scott's Raj Quartet, Monsoon Summer offers a thoughtful storyline, a wealth of well-drawn characters, an enlightening view of history and intelligent entertainment, as Gregson again displays excellence on every page of her work.”
— Richmond Times-Dispatch

“Readers looking beyond American and British borders will relish the flavors of Gregson’s post-war India as they enjoy the story of a young woman coming to grips with a new marriage, a new life and a new land. [Gregson] completely understands the beauty and harshness of India, its land, culture and history. She fearlessly takes on the prejudices that existed during this era to paint an accurate portrait: an intimate glimpse into the British and Indian psyche.”
— RT Reviews

“Engaging . . . [an] overall allure of escapism, a plethora of agreeable characters, and a satisfying, all’s-well-that-ends-well conclusion.”
— The Roanoke Times

“Julia Gregson's newest novel continues the success of her previous novel, East of the Sun, which was published in 26 countries, optioned by the BBC and won the Romantic Novel of the Year Prize as well as the Le Prince Maurice Prize.”
— The Oklahoman

“Historical fiction fans will be fascinated by this multilayered story about a brave but naïve young woman and a country in the midst of political and cultural change.”
— Library Journal Online

“Gregson’s descriptions are evocative of the sounds, sights and smells of India. If you’ve ever wondered about life in India after independence, this is a great insight into that world.”
— The British Weekly

“Gregson, the author of East of the Sun and Band of Angels, brings a wealth of detail to this unconventional love story, ranging from World War II history to rich cultural lore to the pop-music standards of the era. With numerous and well-drawn characters, evocative prose and a commanding story, the former journalist and foreign correspondent again proves that she is also a master of historical fiction. And smoke might not be the only thing that gets in your eyes in this moving novel.”
— Richmond Times-Dispatch

“Gregson shines in her descriptions of the life of the rich, poor and combatant in Cairo and Alexandria, the sights of Giza and the Bosphorus, and the chaotic World War II milieu where women no longer tolerated 'boys making all the rules.' Saba and Dom love, face perils, triumph and intermittently reunite. The story flows at a stately pace to a conclusion both satisfying and open-ended. Fans will want a sequel.”
— Kirkus Reviews

“For a history lesson on WWII, watch Ken Burns’ The War. For romance and intrigue, with the conflict providing the perfect excuse to set a story in exotic locales like Cairo, Gregson delivers in spades…. Credit is due Gregson…for crafting a story about a much-chronicled war that feels thoroughly original.”
— Booklist

“This steamy, sweeping historical draws readers into the seductive world of WWII Egypt….Gregson’s latest displays the author’s command of wartime fiction. Saba is a modern woman struggling with old-fashioned ideas and Dom is a surprisingly complex hero. Seen through their eyes, the wartime Middle East is a heady, intoxicating place and readers will be swept away by the lush prose.”
— Publishers Weekly

“A wonderful romance and adventure story about two passionate young people determined to live life to the fullest, knowing they may not live to see tomorrow…. The contrast of the glamorous, exotic setting with the gritty reality of life in a war zone was compelling and made for a great read. Not to be missed.”
— Historical Novel Society

Praise for East of the Sun:
“Julia Gregson expertly weaves their stories together in this vivid tale.”
— USA Today

“I felt like I'd packed a steamer trunk and was part of the group going out to India. What a gorgeous read. Exciting, romantic, unpredictable and funny. I didn't want it to end.”
— Tracey Ullman

“I always wish for books like this, but they are rare -- a beautifully written compelling saga that is impossible to put down. It’s about ambition, love, survival, and the friendship of three women who leave England for the exotic and sometimes frightening adventure of India. Reading this is an escape to another place and time where friends and romance are waiting.”
— Delia Ephron

“Gregson paints an intricate portrait of three British women who, for different reasons, travel to India in the 1920s . . . . This is a lovely read for anyone who enjoys historical fiction.”—The Oklahoman

“An enjoyable and transporting experience . . . Gregson delivers 1928 India in livid, vivid color. East of the Sun is a fantastic book, one that endures in the mind long after the final page is turned.”—January Magazine

“This is the kind of book I always hope to find. . . .When I got to page 3, I wrote in my notes, ‘I may fall in love with this book.’ And I did.”—Richmond Record-Courier

“East of the Sun is literally packed with amazing details of India, her people, and the lives of the British who occupy the land. Impeccably researched, this story brings together all phases of society, from the lowest caste to the wealthiest British. The characters are incredibly strong and realistic, the dialogue natural, and the storyline riveting. I highly recommend this amazing novel and have given East of the Sun a Perfect 10 for its brilliance.”—Romantic Reviews Today, Perfect 10 rating

“Sometimes, a sprawling historical novel is a perfect ticket to a pleasant escape. A gripping story, engaging characters and descriptions of other times and other places can entertain and educate. And that's just what Julia Gregson serves up in East of the Sun. . . . A winning story, a novel grounded in time and place but one that transcends both to become a sensitive and moving testament to friendship.”—Richmond Times-Dispatch

“A beautiful tapestry of India in the 1920s…Gregson has crafted a panoramic view of India during that time, from the opulent social life of the wealthy in Bombay, to the poverty and orphanages on Tamarind Street. You will not want to put this one down.”—Fredericksburg Freelance Star

Praise for Band of Angels:

“Gregson’s journalistic eye for detail supports the power and connection between the couple....The stench of war is not softened, and the scenes of the battlefield are not for the fainthearted.”—Publishers Weekly

“Adventure, action, passion: this vividly rendered historical saga has all the ingredients necessary to appeal to devoted fans of the genre.”—Booklist

“Gregson is one of today’s best writers in her ability to bring a time and place to life.”—Historical Novels Review, Editor's Choice
or support indie stores by buying on
Copyright © 2020 American Booksellers Association