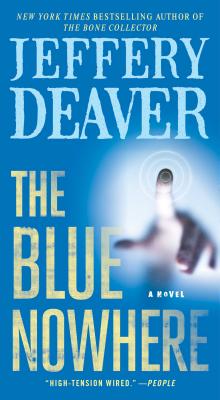 People in Silicon Valley are dying. A mysterious, psychotic, and brilliant computer hacker, code-named Phate, is infiltrating their computer, invading their lives, and—with the perfect line, the perfect, personal detail—luring them to their deaths.

Desperate, the head of the Computer Crimes Division frees Wyatt Gillette, imprisoned on his own hacking charge, to aid the investigation. Gillette has wrangled with Phate before and is glad to have his chance for revenge. But when the head of the CCD, and the man who hired him, is murdered, Wyatt must report to Frank Bristol, a grizzled homicide detective who favors old-fashioned sleuthing and forensic evidence to track killers. Together, Wyatt and Bristol make an unlikely team but with the same villain in their crosshairs, they’ll have to learn to get over the generational, and technological, gaps.

Filled with accurate technical details, a “high-tension wired” (People) mystery, and shocking surprises, The Blue Nowhere will keep you guessing the outcome to the very last page.