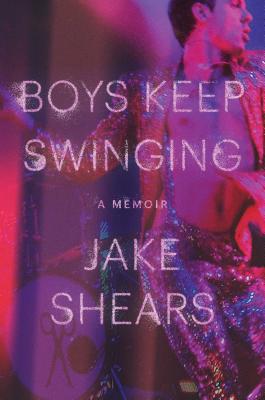 “Wow! So brutally honest and such a really addictive read.” —Elton John

“One courageous joyride of a memoir. It should be illegal for rock stars to write so beautifully.” —Armistead Maupin

“A wild, sexy, emotional ride through underground New York at the millennium…a tale that speaks to the outsider in all of us.” —Andy Cohen

In this deeply affecting memoir, one of rock music’s most entrancing figures transforms the vividness of his musical world into an unforgettable literary account of overcoming odds and finding his true voice.

Candid and courageous, Shears’s writing sings with the same powerful, spirited presence that he brings to his live performances. Following a misfit boy’s development into a dazzling rock star, Boys Keep Swinging is a raucously entertaining memoir that will be an inspiration to anyone with determination and a dream.

“Hugely engaging and appealingly frank…it’s as much a book about growing up gay in 80s and 90s America, and New York’s rich queer performance subculture, as it is about [Shears’s] band’s vertiginous rise, although he draws the latter in vivid detail.”—Alexis Petridis, The Guardian (Best Books of 2018)

Jake Shears is the lead singer and a primary songwriter of the multiplatinum-selling glam rock band Scissor Sisters. Born in Arizona, he grew up in the Seattle area before moving to New York City, where he studied fiction writing at The New School. He wrote the music for Tales of the City, a 2011 stage musical based on Armistead Maupin’s bestselling book series of the same name, and he has played the role of Charlie Price in Kinky Boots on Broadway. Jake Shears recently finished his debut solo album, which will be released in mid-2018. He divides his time between Los Angeles and New Orleans.
Loading...
or
Not Currently Available for Direct Purchase