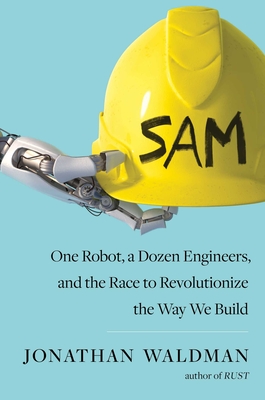 One Robot, a Dozen Engineers, and the Race to Revolutionize the Way We Build

A true story of innovation, centered on a scrappy team of engineers—far from the Silicon Valley limelight—and their quest to achieve a surprisingly difficult technological feat: building a robot that can lay bricks.

Humans have landed men on the moon, programmed cars to drive themselves, and put the knowledge of our entire civilization in your back pocket. But no one—from MIT nerds to Army Corps engineers—has ever built a robot that can lay bricks as well as a mason. Unlike the controlled conditions of a factory line, where robots are now ubiquitous, no two construction sites are alike, and a day’s work involves countless variables—bricks that range in size and quality, temperamental mortar mixes, uneven terrain, fickle weather, and moody foremen.

Twenty-five years ago, on a challenging construction job in Syracuse, architect Nate Podkaminer had a vision of a future full of efficient, automated machines that freed men from the repetitive, toilsome burden of laying bricks. (Bricklayers lift the equivalent of a Ford truck every few days.) Offhandedly, he mentioned the idea to his daughter’s boyfriend, and after some inspired scheming, the architect and engineer—soon to be in-laws—cofounded a humble start-up called Construction Robotics. Working out of a small trailer, they recruited a boldly unconventional team of engineers to build the Semi-Automated Mason: SAM. In classic American tradition, a small, unlikely, and eccentric family-run start-up sought to reimagine the behemoth $1 trillion construction industry—the second biggest industry in America—in bootstrap fashion.

In the tradition of Tracy Kidder’s The Soul of a New Machine, SAM unfolds as an engineering drama, full of trials and setbacks, heated showdowns between meticulous scientists and brash bricklayers (and their even more opinionated union), and hard-earned milestone achievements. Jonathan Waldman, acclaimed author of Rust, brings readers inside the world of the renegade company revolutionizing the most traditional trade.

Praise For SAM: One Robot, a Dozen Engineers, and the Race to Revolutionize the Way We Build…

“Mr. Waldman follows all the drama like a fly on a brick wall, richly reporting scenes and conversations, many on job sites where both circuitry and civility break down. The book is reminiscent of a reality-TV show about a scrappy startup, complete with backstory segments as we learn the pasts and personalities of each new hire. . . . None of it is boring.” —The Wall Street Journal

“SAM reveals a world that surrounds us but mostly eludes our notice—and that’s quite a feat.” —The Boston Globe

“Fascinating . . . It’s a story with enough twists and turns and surprising conflict to engage even those who have never looked closely at a brick, or wanted to. . . . Waldman’s endless curiosity and lively explanations make the book irresistible for anyone inquisitive about machines and the people who make and use them.” —The Columbus Dispatch

“[A] gripping tale . . . As one learns a great deal about geology from John McPhee and computers from Tracy Kidder, Waldman offers a lively, accessible overview of the bricklayer’s art, which is much more complex than one might think. Apart from engendering an appreciation for the uses of technology, the author also adds to the literature surrounding the dignity of artful labor. Human meets machine, and both prevail in an engaging story of technology and discovery.” —Kirkus Reviews

“A compelling, well-paced, and engaging account of the innovations developed by the startup Construction Robotics. . . . Fans of applied iterative trial and error, common to all innovation work, will appreciate this latest piece of popular science and technology.” —Library Journal (starred review)

“A lively look at the team behind SAM, a ‘semi-automated mason’ bricklaying machine . . . This gripping story . . . proves its author to be an industrious reporter and natural storyteller.” —Publishers Weekly

“Jonathan Waldman is our next Tracy Kidder. A true-life business journey, SAM reads like a movie.” —Seth Godin, author of This Is Marketing

"Jonny has delved deep into an intriguing entrepreneurial story that includes robots, bricks, construction, and all of the ups and downs of trying to get a business off the ground. Unlike many of today's 'just raise a ton of money and then good things will happen' stories, this is an awesome tale of grit, endurance, and relentless optimism against almost all odds. When you toss in the history and evolution of a bricklayer, you get a fascinating story. Read it—you'll love it like I did." —Brad Feld, Foundry Group

“Waldman constructs a lively narrative about a subject as down-to-earth as bricklaying. . . . This book is a fascinating biography of a team of engineers and their quest to build a piece of equipment that can lay bricks. . . . The account of this start-up should find an audience among entrepreneurs and wannabes of all interests.” —Missourian

Jonathan Waldman studied writing at Dartmouth and Boston University’s Knight Center for Science Journalism, and worked in print, radio, and TV before landing in books. His first book, Rust: The Longest War, was a finalist for the Los Angeles Times Book Prize and winner of the Colorado Book Award. His writing has otherwise appeared in The New York Times and McSweeney’s. Visit him at JonnyWaldman.com or email him at JonnyWaldman@gmail.com.
Loading...
or
Not Currently Available for Direct Purchase