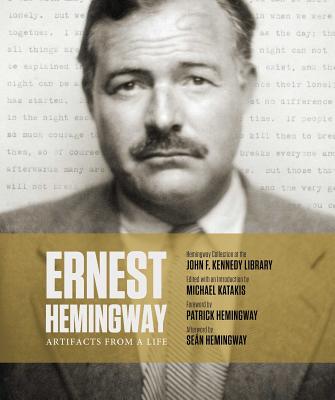 Artifacts From a Life

Beautifully designed, intimate and illuminating, this is the story of American icon Ernest Hemingway's life through the documents, photographs, and miscellany he kept, compiled by the steward of the Hemingway estate and featuring contributions by his son and grandson.

For many people, Ernest Hemingway remains more a compilation of myths than a person: soldier, sportsman, lover, expat, and of course, writer. But the actual life underneath these various legends remains elusive; what did he look like as a laughing child or young soldier? What did he say in his most personal letters? How did the train tickets he held on his way from France to Spain or across the American Midwest transform him, and what kind of notes, for future stories or otherwise, did he take on these journeys?

Ernest Hemingway: Artifacts from a Life answers these questions, and many others. Edited and with an introduction by the manager of the Hemingway estate, featuring a foreword by Hemingway’s son Patrick and an afterword by his grandson Seán, this rich and illuminating book tells the story of a major American icon through the objects he touched, the moments he saw, the thoughts he had every day. Featuring over four hundred dazzling images from every stage and facet of Hemingway’s life, many of them never previously published, this volume is a portrait unlike any other. From photos of Hemingway running with the bulls in Spain to candid letters he wrote to his wives and his publishers, it is a one-of-a-kind, stunning tribute to one of the most titanic figures in literature.

Michael Katakis is the author of a number of books, including Ernest Hemingway: Artifacts From a Life, Despatches (special limited edition), The Vietnam Veteran’s Memorial, A Thousand Shards of Glass: There Is Another America, Traveller: Observations From an American in Exile and Photographs and Words (with Kris L. Hardin). He is the editor of Sacred Trusts: Essays on Stewardship and Responsibility and Excavating Voices: Listening to Photographs of Native Americans. His work has been translated into multiple languages and his writing and photography have been collected by a wide range of institutions, including The National Portrait Gallery in Washington, DC; the Victoria and Albert Museum and the British Library in London; and Stanford University’s Special Collections Department. In 1999, Michael was elected Fellow of the Royal Geographical Society. He lives in Paris and Carmel.

Praise For Ernest Hemingway: Artifacts From a Life…

"Has power to delight... Hemingway enthusiasts will find it enjoyable."
— Publishers Weekly